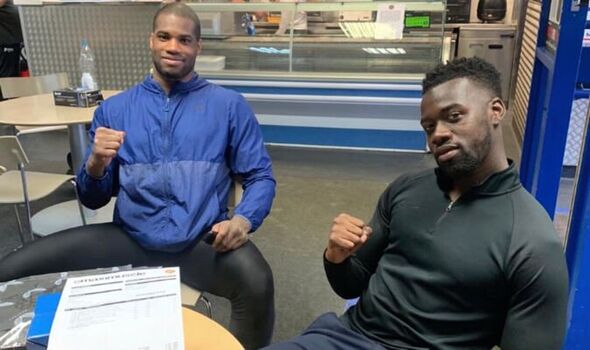 There is no typical path to becoming a sports agent. For Sal Jobe, it was a venture he stumbled into by accident. There are no regrets though because in a few short years after embarking on this new journey, Jobe has already played a role in making huge heavyweight fights and sat in boardrooms negotiating transfer deals.

He had thought he was destined for a life on the screen having appeared in big movies like Star Wars and The Legend of Tarzan before the dots connected and this new vision was born. “I was an actor, well actually, I still am but now I have two passions and two careers and I love being an agent as well,” he tells Express Sport.

“I’d always had thoughts about becoming an agent and I realised through my time in the acting game that I was good at networking and had established some good contacts in the sporting world. That was enough for me to give it a whirl.”

In our 30-minute chat, it becomes apparent very quickly that Jobe is in the right line of work; the phrase ‘gift of the gab’ springs to mind. He has always been good at selling something and can’t help but make a salesman-like pitch when describing some of his clients in this conversation. The Londoner, who also considers himself an entrepreneur, works with a number of familiar faces in football and boxing but also has clients in other sports.

Some of the biggest names he has worked with so far include heavyweight fighters Daniel Dubois, Petar Milas and Jarrell Miller. The latter he helped to secure a blockbuster world heavyweight title fight against Anthony Joshua back in 2019 before Miller’s failed drugs test saw it collapse and the pair split ties.

“Working with Jarrell Miller was interesting,” Jobe said. “It wasn’t easy because he is based in Brooklyn but even though he was offered many things by many people, he knew that again through my contacts we could get him a direct route to the belts which was proven.

“He wanted to fight for the world titles and I helped deliver that in less than six months.” Despite that being a huge moment in Jobe’s career, he does not count it as his greatest achievement.

Jobe also has a number of female and Swedish players on his roster and has shone a light behind those boardroom doors where transfers are negotiated.

“It’s a long process, longer than some people think,” he says. “It’s not easy and sometimes can be frustrating trying to get a deal over the line. There’s a lot of back and forth and sounding out from clubs.

“We’re both after the best deal so compromises have to be made. When you do manage to negotiate a big deal, it’s so rewarding because the player is happy and it’s how agents make a living.

“I know agents, in general, have a bad rep and that’s because there are some who have mistreated clients and conned them out of their hard-earned money, but that’s not how I conduct business. One of the motivations to get into this was because I was a talented footballer when I was younger, but never had someone to pull strings for me to have the opportunity to get in front of clubs so I decided to be that person for someone else.”

Having enjoyed a successful career so far, Jobe has some advice for young aspiring agents.

He adds: “My advice is simple, make yourself highly knowledgeable in the fold you wish to operate in, build a solid and reliable contact base and work smart as well as hard.”