Charlotte’s evening started badly during the Inside the NBA pre-game show, when Charles Barkley gave one of his kiss of death guarantees that the Hornets would prevail over the Pacers.

It got worse when Doug McDermott, otherwise known as Dougie McBuckets, torched them to the tune of 14 points in the first five minutes, hitting four three-point shots in the process. At that point, they might as well have walked off the court. Things only continued to go downhill from there. McDermott notched 16 of his 21 points in the first quarter alone.

The far more waspish Pacers dominated their lacklustre opponents in every facet and led comfortably wire to wire, despite missing two of their best players in Caris LeVert (Covid protocols) and Myles Turner (a long-term toe injury).

Their lone All-Star Domantas Sabonis had a relatively off-night around the basket but still pulled down a staggering 21 rebounds, at one point almost going toe-to-toe with the entire Charlotte Hornets roster on the boards.

Part of the problem through the first half appeared to be the attention Hornets’ defenders were giving the flashy Lithuanian forward, who verged on triple-double territory regardless after scoring 14 points and dishing 9 assists. This left the rest of the Pacers rotation free to continually whir about and screen for each other off-ball – there always seemed to be a navy jersey alone beyond the arc or with space to cut to the hoop for an easy basket.

After the game, TNT‘s Kenny Smith admitted he now officially considered Sabonis a superstar (rather than a mere All-Star) due to the fact he impacted the game in so many ways, particularly on the defensive end, even as his shot wasn’t falling.

His supporting cast wasn’t bad either.

"Everybody's confidence is the highest it's been all year."

Sabonis spoke with the TNT crew after the Pacers' huge win | #StateFarmPlayIn pic.twitter.com/XDZjfWBLpT

Guard Malcom Brogdon was as clinically efficient, and understated, as ever (16 points, 8 assits), while Charlotte had no answer for the perpetual nuisance that is T.J. McConnell, who ran the second unit with aplomb (17 points, 5 rebounds, 3 assists, 4 steals).

Perhaps the star of the show was Oshae Brissett, a guy who was playing G League basketball until April with the Fort Wayne Mad Ants. The Pacers took a chance on Brissett on an initial ten-day contract and he has repaid them tenfold with his performances during the final stretch of the regular season.

Now he’s tied down to a three-year contract and has 23 points in a postseason game on his resume. Not bad at all for a player Toronto waived before the start of the season.

A reminder that Oshae Brissett was playing in the G League until signing with the Pacers on a 10-day contract in April.

He's got 23 points and counting in his first postseason game pic.twitter.com/2oaSNw5XqL

For the Hornets, Miles Bridges scored 23 and Cody Zeller made all seven of his shots to finish with 17 points off the bench. ‘Scary’ Terry Rozier had 16 points but suffered from a truly frightening shooting stroke all night. He missed 13 of 20 shots from the floor and all nine from 3-point range, all on decent looks he would usually gobble up.

Then there was the uncharacteristically subdued LaMelo Ball, who couldn’t seem to get going in his first-ever taste of the NBA postseason. Ball, the likely Rookie of the Year, made just 4 of 14 shots to finish with 14 points for the Hornets, who as a team went 12 of 40 from beyond the arc en route to sustaining their sixth straight loss. This, however, won’t be the last time we see him under the bright lights of the playoffs. 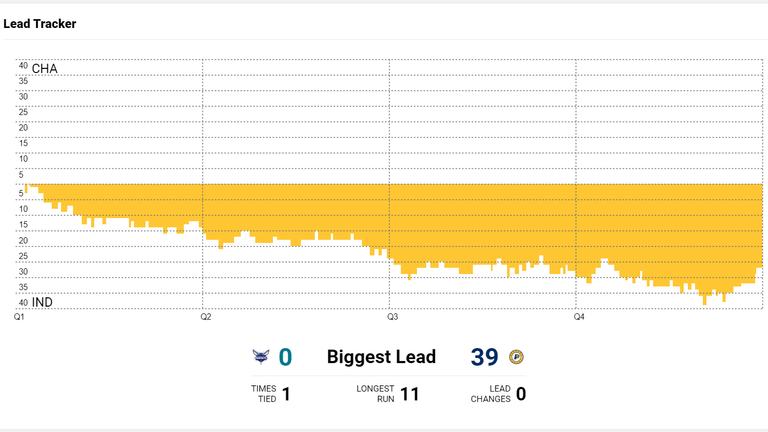 This appeared to be a catastrophic off-night for James Borrego’s team, perhaps exaggerated by the heaps of potential they had shown during the regular season. Indiana shot a robust 55 percent from the floor and 46 percent from 3-point range; Charlotte were 46 percent and 30 percent from deep in comparison. The leadership, experience and playmaking of Gordon Hayward, in particular, would have made a huge difference for the Hornets.

But whatever their shooting woes, Nate Bjorkgren’s Pacers ran them off the floor and will now look forward to a do-or-die game against the Washington Wizards with reasonably well-rested starters. 39-point leads might not be much for the spectators but it certainly isn’t a bad thing for keeping confidence high and the minutes of your best players down.

S/o to the casuals that bet against us tonight! 😂 this time of the year different! People always forget that! GOOD DUB!

Turner, dressed in street clothes, cheered every point in ‘garbage time’ as though his life depended on it. That kind of team spirit can only bode well for Indiana as they head to DC on Thursday night. They know what they have to do. Play like this again and they’ll be taking on the Philadelphia 76ers in the first round of the playoffs.