The Warriors have fallen on some rough times, with injuries (see Klay Thompson) and regression (see Draymond Green) robbing them of any semblance to their glory years.

But as long as Stephen Curry is around, they remain a team to watch. Curry had been near the top of the MVP discussion for much of the season after he led the Warriors to an unlikely 19-15 start.

Since then, the Warriors have been in a freefall (they’ve lost 12 of their past 17 games), partly because Curry has missed time with an inflamed tailbone.

Now that he has returned, Curry is back to being Curry. He scored 41 points on 14-of-21 shooting to lead the Warriors to a 122-121 win over the Milwaukee Bucks on Tuesday that stopped a three-game slide. 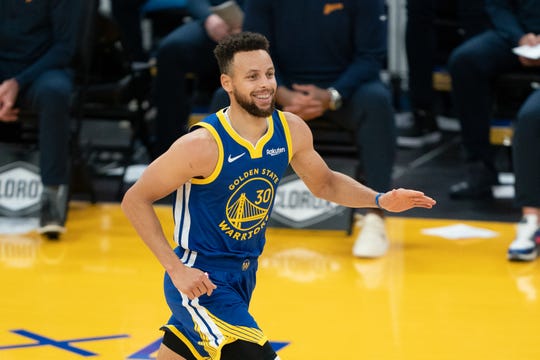 “He’s playing with a ton of confidence,” Warriors coach Steve Kerr said. “But it’s hard to say more than ever before because he’s always, ever since the day I got here, I’ve never seen him not play with confidence. I think the biggest thing for me watching him is he just looks stronger, physically stronger than ever. … I just think his body, his mind, everything is, it has really sort of peaked this season.”

Curry, who has splashed at least 200 3-pointers for an NBA-record eight different seasons, is averaging 29.7 points per game, his highest mark since 2015-16 when he won MVP. Now that LeBron James and Joel Embiid have missed time due to injury, it could be a two-man MVP race between Curry and frontrunner Nikola Jokic.

But Curry’s MVP candidacy is likely null and void if the Warriors don’t win more games.

And herein lies the Warriors’ dilemma. On the one hand, the Warriors want to win now. But they also want to develop rookie James Wiseman. And, oh, they also don’t want to wear down Curry.

“It’s tough,” Curry told reporters earlier this week. “Keep it real, we all had higher expectations for where we were supposed to be this season. And guys want to outperform. When they go out there, they want to exceed the expectations for themselves, for the coaching staff, whatever it is. And when it doesn't happen, it's frustrating.”

After missing 10 consecutive games with a left knee bone bruise, 76ers center Joel Embiid returned to the lineup on Saturday and showed some rust, despite a 24-point, eight-rebound effort.

Embiid looked like his old MVP self in Tuesday’s 106-96 win over the Boston Celtics. He had 35 points, with six rebounds over 33 minutes.

Before his injury, Embiid was seen as a favorite to win his first MVP award. And after two games back in the lineup, he looks like he’s already back to that form.

“We're walking out and he turned to me and said, ‘I'm back’ and I said, ‘Yeah, I noticed,’” 76ers coach Doc Rivers said. "He was not happy after the first game coming back. He expects so much, you miss three-plus weeks, you're not going to be that good, and the first showing. I thought the other night allowed him to get some more work in and then playing tonight was big for him.”

No one can deny what @JoelEmbiid is doing this season.

In the third quarter of their game Tuesday against the visiting New Orleans Pelicans, the Hawks became the first team in NBA history to go a perfect 11-for-11 from 3-point range in a single quarter, per ESPN Stats and Info.

Solomon Hill hit Atlanta’s first 3-pointer of the quarter at the 10:48 mark of the quarter, and Lou Williams ended the barrage with the 11th 3-pointer with 34 seconds remaining.

The Hawks scored 46 points in the quarter, their second-highest scoring third period in franchise history (the first being 47 vs. the Washington Wizards on Jan. 26, 2020).

“It really didn’t [feel like a record]; it just felt like we were out there playing and having fun,” Hawks All-Star guard Trae Young said after the 123-107 win. “Whenever you're doing that, whenever you're just out there playing and having fun, things like that are going to happen. I didn't notice in the game or whatever that we were on a roll like that. But it definitely felt like it for a second. We were just having fun.”

The debate rages as to who’s a better fit for the Nuggets.

The Nuggets need a strong wing defender, and Jerami Grant is widely considered one of the league’s best in that category. But Grant left the Nuggets in free agency after last season, taking the Pistons’ three-year, $60 million deal over the Nuggets’ four-year, $60 million offer. With Grant, the Nuggets advanced to the Western Conference finals before falling to the Lakers.

Grant’s departure left the Nuggets with a gaping hole on the wings, and Nuggets president of basketball operations Tim Connelly had to deal a future first-round pick, along with R.J. Hampton and defensive ace Gary Harris to land Grant’s replacement, Aaron Gordon.

There’s no arguing with the results so far. Gordon has been the perfect complement to MVP frontrunner Nikola Jokic, and the Nuggets have gone 5-0 since Gordon joined the lineup.

But just for old times’ sake, Grant showed the Nuggets what he can do during their Tuesday matchup. The Nuggets beat the Pistons, 134-119, but Grant finished with 29 points on 11-of-18 shooting. Gordon had nine points and four rebounds.

Of course, the final verdict won’t be known until the playoffs. With Gordon in tow, the Nuggets are seen as a legitimate contender to dethrone the Lakers in the West.

The Denver Nuggets are the REAL DEAL! pic.twitter.com/MI8ujKcNly

Game of the night

Two years after back-to-back seasons of at least 61 losses, the Phoenix Suns have a shot at earning the No. 1 seed in the Western Conference. They’ll get a crack at the conference-leading Utah Jazz on Wednesday in the game of the night.

“This is a big one — 1 seed vs. 2 seed. You try not to look at those things, but it’s hard not to,” Donovan Mitchell said after Monday’s loss to the Mavericks. “You understand the magnitude of the game that’s coming up.”