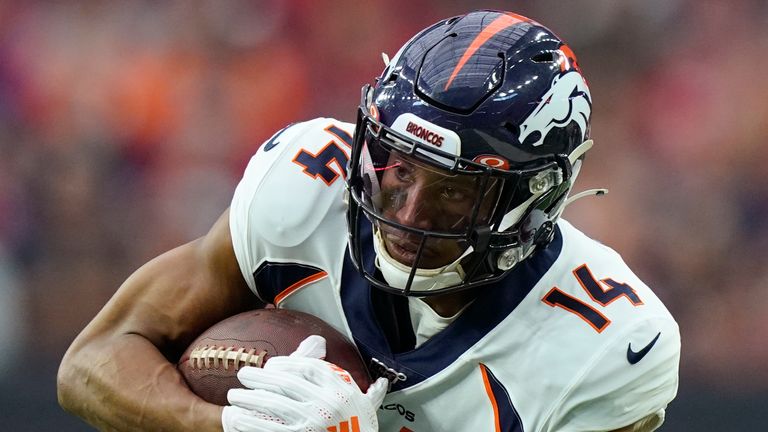 Denver Broncos wide receiver Courtland Sutton is optimistic that he will be ready to take participate at the start of the team’s training camp.

Denver Broncos wide receiver Courtland Sutton is optimistic that he will be ready to take participate at the start of the team’s training camp.

Sutton working his way back from a torn ACL sustained in the Broncos’ 26-21 loss to the Pittsburgh Steelers in Week Two of the 2020 season.

“(My knee) feels really good,” he said. “To be at the stage where I’m at right now, post-surgery it gives me hope and promise for the future because I’m only going to continue to attack rehab as I have.”

Sutton recorded 72 receptions for 1,112 yards and six touchdowns during his Pro Bowl season in 2019. He has 117 catches for 1,882 yards and 10 touchdowns in 33 career games since being selected by Denver in the second round of the 2018 NFL Draft.

The return of Sutton would be a boon for the Broncos, whose receiver corps also features 2020 first-rounder Jerry Jeudy, Tim Patrick and K.J. Hamler, alongside the pass-catching talents of tight end Noah Fant.

“We have weapons in every category that you’re looking for,” Sutton said. “Speed, size, catching ability, route running. I feel like we’re pretty diverse in our room. I was excited watching those dudes have the success that they had this past season. I’m even more excited to be able to be in there with them this upcoming season.”

Sutton could find himself catching passes from a new quarterback after the Broncos traded a 2021 sixth-round pick to the Carolina Panthers in exchange for Teddy Bridgewater, who arrives as immediate competition for Drew Lock.

Denver also strengthened on offense in the Draft, using their second-round pick on powerful North Carolina running back Javonte Williams following the free agency departure of Phillip Lindsay, before adding Quinn Meinerz to their offensive line and selecting Auburn wide receiver Seth Williams in the sixth round.