Carson Wentz threw for 286 yards and three touchdowns as the Philadelphia Eagles earned a tough 24-18 win over London’s adopted home team of the Jacksonville Jaguars at Wembley.

Sundays attendance of 85,870 – a record for an NFL game in London – was dominated by Eagles fans, who became louder as the game went on and their team came alive at the end of the first half and into the second.

It was a sluggish start from both teams offensively, as the Eagles kicked off the game with a drive ending in a Wentz fumble. After completing a third-down pass to himself and finding Jordan Matthews on a third-and-14, Wentz was strip-sacked by Marcell Dareus. Telvin Smith recovered and only a tackle by the Eagles quarterback himself stopped a touchdown.

Jaguars quarterback Blake Bortles started his day with a pair of runs for 10 and nine yards, with his legs providing most of Jacksonville’s offense in the first quarter. A Josh Lambo field goal capped that first drive, and the kicker added a massive 57-yarder that dropped just through the uprights as the second quarter began.

The Eagles offense struggled massively in the first 30 minutes, with the Wentz fumble being followed by an interception by Jalen Ramsey on the very next drive. They were plagued by injuries, losing both starting tackles – Lane Johnson and Jason Peters – early in the game.

But Philly were saved right before the half. As the Jaguars took the at the two-minute warning, Eagles safety Avonte Maddox forced the ball out from receiver Keelan Cole. Three plays later, Wentz scrambled 13 yards on a third-and-11, and on the next, he found tight end Dallas Goedert for 32 yards and a 10-6 half-time lead.

The Eagles came out firing again in the second, with Wentz leading a 96-yard drive resulting in a 36-yard catch-and-run for a touchdown by Wendell Smallwood. Like the previous scoring drive, a big third-down conversion – this time Wentz to Jordan Matthews – was followed immediately by a score to make it 17-6.

But the Jaguars would not go without a fight. Nine plays and 75 yards later, Jacksonville fired straight back with a drive ending in an 11-yard scoring strike to Dede Westbrook. Bortles led a methodical drive down the field, but the Jags could only pull to within five of the Eagles as their two-point attempt failed.

As their defense held strong, another big play by Westbrook – a punt return – gave them great field position and Lambo added another three points to make it 17-15. 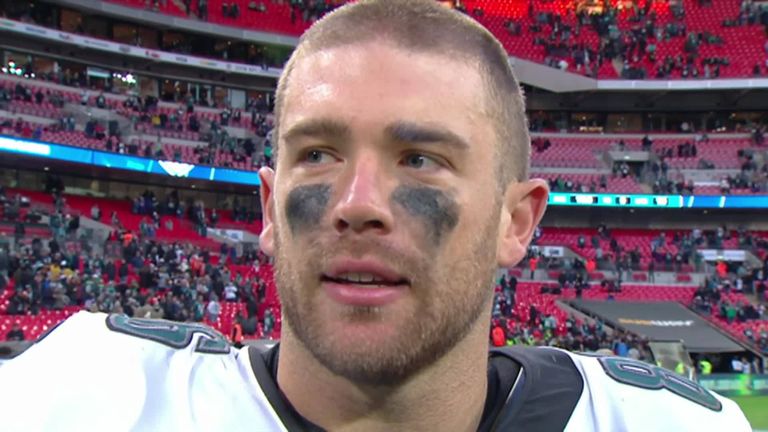 The Eagles struck again with a Wentz five-yard score to Zach Ertz and will have felt good with a nine-point lead in the fourth quarter. But, Philadelphia were lucky twice – DJ Chark dropped a wide-open touchdown from Bortles forcing the Jags to kick a field goal and, on the ensuing possession for the Eagles, Josh Adams was marked down after appearing to lose a fumble.

Down 24-18 with just over five minutes left, Jacksonville got the ball back and the chance to take the lead. Despite Bortles yet again finding the first down marker with his feet on a fourth down, the Eagles defense held strong on a second fourth-down attempt to give Philadelphia the ball back for the final time.