Beyond all the other reasoning and conjecture, the Blackhawks’ firing of Joel Quenneville means Chicago’s Stanley Cup window is closed for good. There will not be a storybook fourth championship for the core of players who rescued a franchise. If Jonathan Toews, Patrick Kane, Corey Crawford, Duncan Keith or Brent Seabrook ever gets another chance to lug the Cup around a jubilant city, it won’t be Chicago.

Tuesday’s decision by general manager Stan Bowman to remove Quenneville and promote 33-year-old Jeremy Colliton from AHL Rockford was proof the Blackhawks have squeezed every drop from their decade of excellence. There’s nothing left. No more parades, no more tracking the Cup through every hopping Chicago neighborhood and no more taking Lord Stanley back to hometowns that span the globe.

That’s all gone now, even if the Blackhawks’ brass would disagree.

“I wouldn’t label it as a rebuilding, I reference today more of a remodeling,” team president John McDonough told reporters at a Tuesday news conference. “We still have Hall of Fame players. My expectations are that this is a playoff team, and if you get in anything can happen, so that is the phase that we’re in right now.”

Sure, the Blackhawks can talk up Colliton. He has been called a prodigy who has impressed everybody who has watched him coach and he may be more apt to use next-level statistics to change how Chicago plays; however, ever since 2012 there have been rumblings about a power struggle and disconnect between Bowman and his coach — which Bowman denied Tuesday.

Patrick Kane on Joel Quenneville: “He’s going to be an icon in Chicago for the longest time. The great things he’s done for this organization, winning three Stanley Cups. That’ll never be forgotten.” #Blackhawks pic.twitter.com/VTshN7qZBy

Moving forward, young players like Alex DeBrincat, Nick Schmaltz and Henri Jokiharju could respond even more to the millennial now behind the Blackhawks’ bench. There’s also the promising group of defensemen in the system who could benefit from a more modern coach willing to adapt to current trends, and veterans who could like hearing a new message.

“I think at the end of the day, we’re not where we need to be,” Bowman said. “We want to be in the playoffs, and right now we’ve got some work to do to get there. We have 67 games left, so we still [have] a lot of hockey to be played, and I think the urgency was, we’ve got to turn this thing around quickly.”

One thing that won’t change: The roster will still be built by Bowman, who got a forceful vote of confidence from McDonough.

“You’d like most to go your way, and over time they may. But his body of work is excellent. I want him to succeed. I want our roster to succeed.”

Nothing about Bowman’s team-building, Colliton’s coaching or Adam Boqvist and Jokiharju’s promise is guaranteed to pan out the way things did with Quenneville. Nobody thinks DeBrincat or Schmaltz has a ceiling as high as Toews or Kane did when they were young. Boqvist does draw Erik Karlsson comparisons, but expecting him to come even close to that level would be unfair.

Even if Colliton were just replacing a Chicago icon (ask Dave Wannstedt or Tim Floyd or whoever manages the 2020 Cubs about that), his job would already be difficult. Add in that he will also be expected to grow the young players, prod Chicago back into the playoffs and do it while the championship core ages with cap numbers that make complete roster flexibility next to impossible.

“The challenge is to hit the ground running,” Colliton said, who only retired four years ago from suiting up. “We don’t have much time before we play Thursday [against Carolina].” 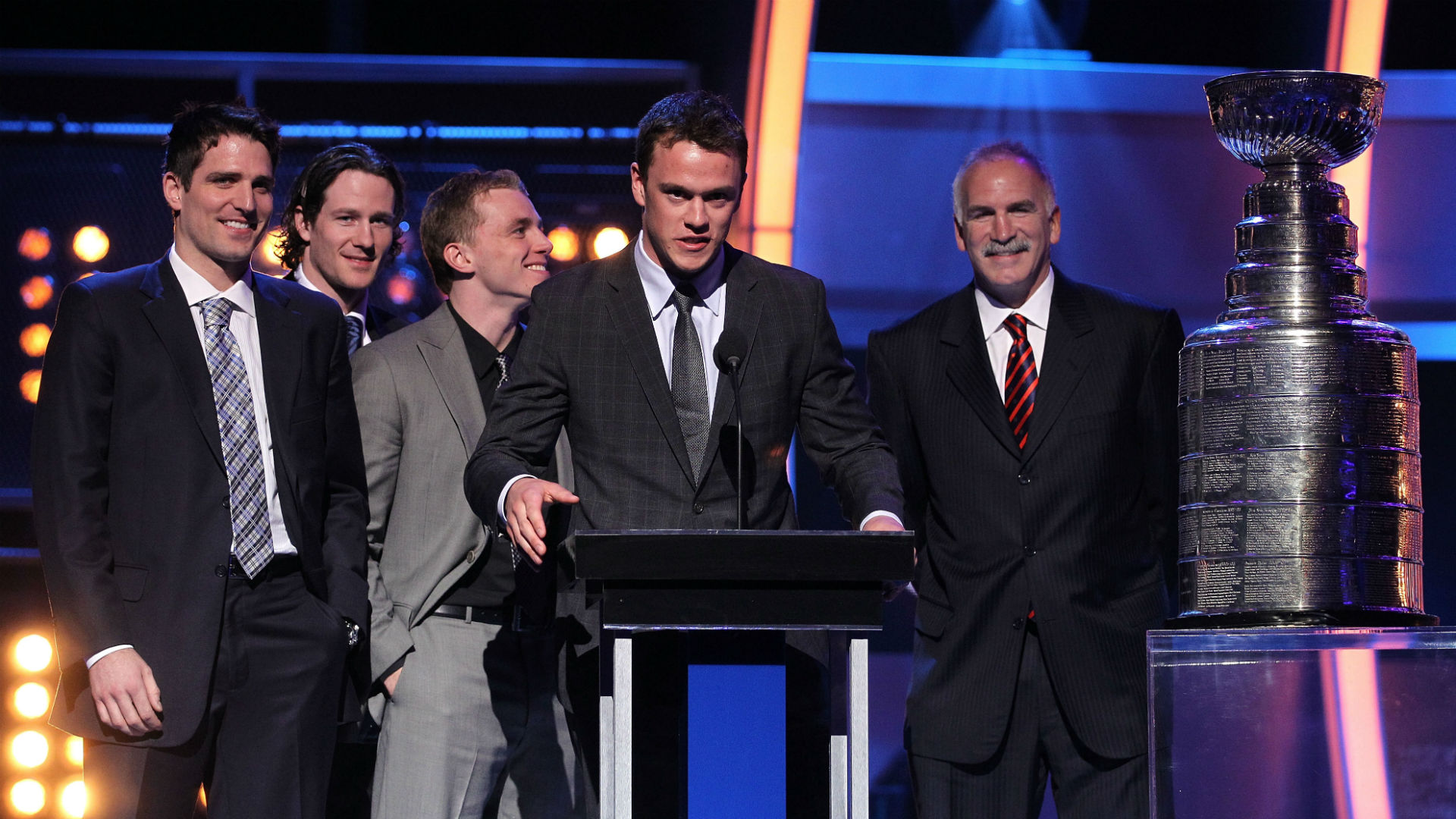 In truth, the Cup window was closed well before 8:05 a.m. Tuesday when the Blackhawks announced the change.

After winning the 2015 Stanley Cup, the Blackhawks were on top of the hockey world. They were the unquestioned standard of the NHL’s salary cap era. Torn down after the 2010 title, Chicago escaped from cap hell and Bowman built the roster into a juggernaut that won in 2013. If not for a crushing Game 7 loss in the 2014 Western Conference finals to the Kings, the 2015 Cup likely would have been the Blackhawks’ third straight.

But Bowman’s ensuing 12 months after the third Cup with Quenneville started Chicago on this path. Over the next year, Bowman was unable to re-sign Brandon Saad because of cap issues and sent him to Columbus. He moved Patrick Sharp and Stephen Johns to Dallas for Trevor Daley, a defenseman who never fit. Marcus Kruger got a bad deal, and Seabrook was handed a miserable eight-year contract when he was already in decline.

With a team practically screaming for blue-line help at the 2016 deadline, Bowman dealt promising center Phillip Danault for journeymen forwards Dale Weise and Tomas Fleischmann. Fittingly, Chicago’s 2016 season ended in Game 7 in the first round of the playoffs when inexperienced defenseman Erik Gustafsson’s turnover led to the Blues’ game-winning goal.

Then, exactly one year after winning the 2015 Cup on home ice, Bowman paid for his errant Bryan Bickell contract by sending him to Carolina, but at the cost of Teuvo Teravainen.

Everything after that period — dealing Artemi Panarin for Saad, trading Quenneville-favorite Niklas Hjalmarsson for Connor Murphy, Marian Hossa’s career-ending illness, Crawford’s concussion, this summer’s inaction — only accelerated the demise that really began three years ago. The cap issues, which elite teams can’t completely avoid, combined with the effects of time and years of win-now deals, made Quenneville’s job tougher.

A five-game winless streak after a 6-2-2 start meant the end.

Colliton says Quenneville was a reason he wanted to come to Chicago and it’s bittersweet to be succeeding him. #Blackhawks

“It was a shock to wake up to the news this morning, for sure,” Toews told reporters. “I think everyone as players in the locker room, you take responsibilities. But at the end of the day, whether it’s trades, changes, coaches being relieved of duties, those decisions are above your head. I guess at the end of the day you have to respect them and acknowledge them and move on with the decisions that have been made.”

This isn’t to say Quenneville was always perfect. He rode some veterans too long and seemed to value outdated traits long after they had become obsolete. He didn’t get enough from Daley, Murphy or Michal Kempny and was set in his ways, only recently shedding a label that he didn’t like young players.

Flawed or not, Quenneville was a famous face, and mustache, of the Blackhawks. He became a Chicago celebrity who did commercials, was beloved by fans, respected by players and coached the Blackhawks during their golden era.