New York Rangers forward Mika Zibanejad had a hat trick in the bag early in the third period but didn't stop there. Four goals apparently was not enough for him either.

Thirty-three seconds into overtime, Zibanejad received a pass from Artemi Panarin and slipped it past Washington Capitals goaltender Ilya Sasonov for his fifth goal of the night and a 6-5 victory to give the Rangers a pivotal two points. The 26-year-old became the second player in NHL history to score his fifth goal in overtime, something that hadn't been done since Sergei Fedorov accomplished it on Dec. 26, 1996 for the Detroit Red Wings — also against the Capitals.

“The puck followed me today, I guess,” Zibanejad said. “You look at the goals and it’s unbelievable plays being made and today I was at the right spot at the right time.

“It’s a night I’ll remember for a long time.”

Alexander Ovechkin kept the pressure on Zibanejad and the Rangers in the third. After Zibanejad made it 4-3 12 seconds into the period, Ovechkin tied it at 9:22.

WHAT IF THERE WERE NO FANS: How sports could look if coronavirus forces larger action 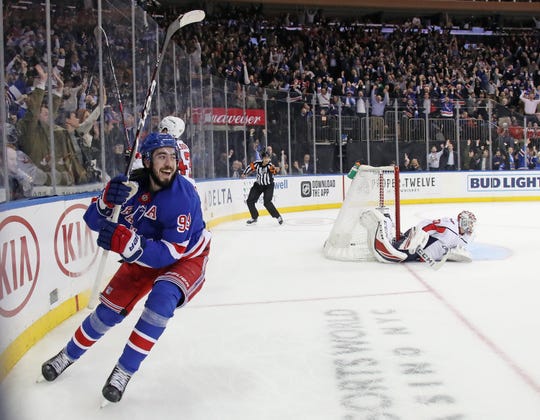 Mika Zibanejad celebrates after scoring his fifth goal of the game in overtime to defeat Ilya Samsonov 30 and the Washington Capitals 5-4 at Madison Square Garden. (Photo: Bruce Bennett, Getty Images)

With the Rangers on a powerplay, rookie Kaapo Kakko fired a shot off the board that rebounded directly to a darting Zibanejad, who once again gave the Rangers the lead. Ovechkin tied the game less than minute later, with 43 seconds on the clock.

But when overtime rolled around, Zibanejad had the first opportunity and he didn't miss.

Are you kidding me??🤯 Did that just happen? What a performance!! #Mikaforpresident#NYR

No NHL player had scored five goals in a game since Patrick Laine of the Winnipeg Jets did it on Nov. 24, 2018. Zibanejad joined Don Murdoch (1976) and Mark Pavelich (1983) as the only Rangers to score five times.

"Sit back and watch it and enjoy it because it was a special night in so many ways for him and for us obviously to win a game of that magnitude, the ebbs and flows of it," Rangers coach David Quinn said. "It was a special night obviously, not just for Mika, but for all of us to be part of it."

WHERE ARE THEY?: St. Louis Blues will host 'Hockey is for Everyone' night … while team plays on road

With his pair of goals, Ovechkin is tied with Boston's David Pastrnak atop the NHL goals list (47). Zibanejad's quintet of goals gave him 38 on the season.

Following the game, Zibanejad's teammates pranked him by emptying out of the locker room before he returned to surprise him.

The Rangers are still alive in a crowded Metropolitan Division playoff picture, with four teams — the Pittsburgh Penguins, Columbus Blue Jackets, New York Islanders and Rangers — competing for the two Eastern Conference wild card spots. Meanwhile, the overtime loss dropped the Capitals into a first-place tie with the Philadelphia Flyers.