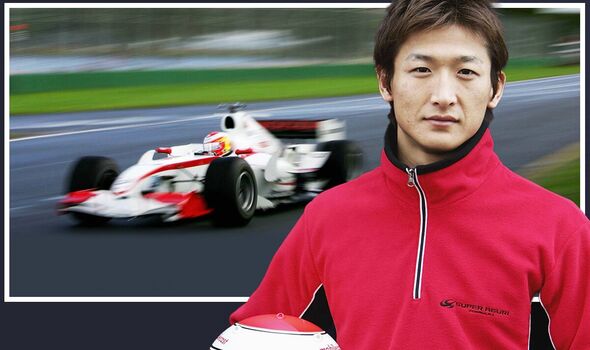 Japanese driver Yuji Ide is considered to be F1’s “worst ever” after an abysmal time in the top flight of motorsport. Ide only entered four Grands Prix before he was stunningly banned by organisers who stripped him of his super licence.

He was drafted into the Super Aguri team for its debut season in 2006 after impressing in Japanese junior single-seaters. Ide claimed he “took a gamble” to join the team after claiming to have been offered a series of drives back home.

However, Ide struggled from the outset and was three seconds slower than team-mate Takuma Sato in qualifying at the opening round in Bahrain. Ide’s lap time was a staggering nine seconds off the pace of polesitter Michael Schumacher.

He retired from the first two races of the season after mechanical issues before dropping further back in Australia.

In qualifying, he was almost four seconds slower than Sato and almost 11 seconds off eventual polesitter Jenson Button. The Japanese driver struggled to keep his car in a straight line at Albert Park, suffering from a series of spins.

However, things went from bad to worse at the San Marino Grand Prix, Ide’s final race in the sport. He dived down the inside of Christijan Albers at the Villeneuve corner, clashing wheels and flipping the Midland into a barrel roll.

The collision ended his chances of establishing himself on the grid as the FIA took drastic action and suspended his licence.

Super Aguri claimed they had not given up on Ide making a return and blamed a lack of testing for his issues. However, team boss Aguri Suzuki eventually ripped into the Japanese driver and appeared to blame him for a lack of knowledge.

“I hope he’ll learn from Takuma [Sato] as well as his race engineer, because he doesn’t speak English (at all). On the pit-to-car radio, I had to translate. That was very awkward for him and his race engineer. In the practice sessions on Friday and Saturday I had to ask, ‘Yuji, what do you need now?’ And, because he’s so inexperienced in F1, even I found his answers, given in Japanese, hard to understand.”