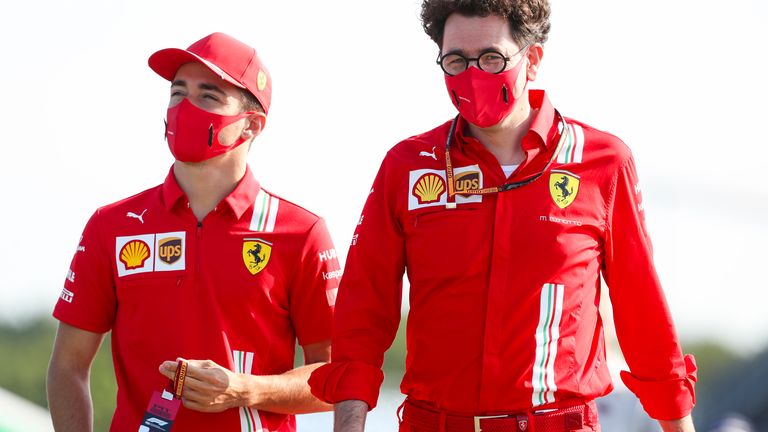 Charles Leclerc and Carlos Sainz will be “free to fight” as Ferrari team-mates at the start of 2021, according to team boss Mattia Binotto – who says his exciting young driver line-up means he has no regrets about not bringing Lewis Hamilton to Formula 1’s most famous team.

After a miserable 2020, which saw the sport’s historically dominant force finish down in sixth, Ferrari head into a new era this year with their youngest line-up in over half a century as Sainz, 26, replaces four-time world champion Sebastian Vettel, joining Leclerc, 23.

Sainz, who was at Ferrari’s Maranello headquarters on Tuesday to start preparations for the 2021 season, will drive in the iconic red after a move from McLaren – which was agreed back in May of last year.

👀The eyes chico… ! After a short time off, it's time to get back to work. Travelling to Maranello tomorrow to start preparing the season ahead. 💪 Andiamo @ScuderiaFerrari
-#CarlosSainz pic.twitter.com/7Jw9w4Fh0G

“I think Sebastian is a great person, a great driver, and we had some great moments together – but I think it was time to take a different decision and to move forward,” Binotto explained to Sky Sports News’ Craig Slater in an exclusive interview.

“We will have a very young line-up in the future, the youngest Ferrari line-up since 1968, but those two drivers, Charles and Carlos, are very strong, very talented, and even though they are young they have some good experience in F1.

“So I’m very happy for the choice.”

Ferrari have traditionally employed a ‘number one’ and ‘two’ driver over the years, most famously when Michael Schumacher embarked on a trophy-laden streak in the early 2000s. But Leclerc’s form saw him and Vettel treated as equals, often with combative results – and Binotto says Leclerc and Sainz will start that way, too. 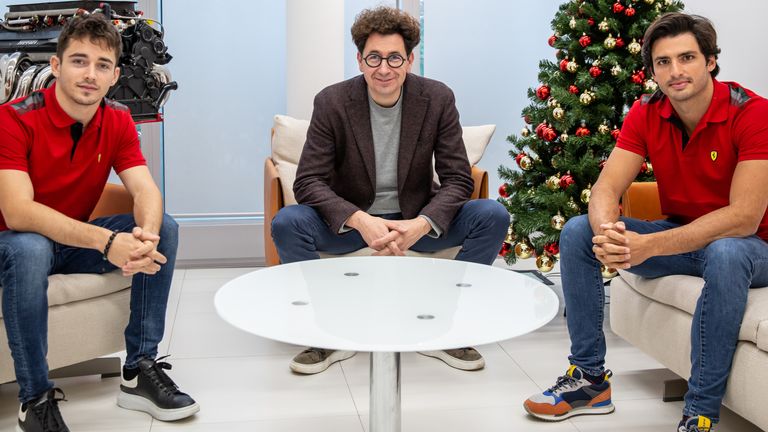 “There is not a number one and number two, they will have equal opportunities – certainly at the start of the season,” said the team boss. “I’m pretty happy then that they are free to fight.

“Later in the season, let’s see how things will progress, let’s see what objectives individual drivers can maybe achieve and if we need to adopt a different strategy but at the start of the season they will be free to fight.”

The Scuderia are aiming to at least get back up to third in the standings this year, although are prioritising the “clean slate” that is the 2022 rules refresh, which could reset the F1 pecking order completely.

Ferrari on why there is no Hamilton ‘regret’

With Ferrari reeling after their worst season in 40 years and Mercedes celebrating a seventh consecutive title rout, talk of Silver Arrows superstar Hamilton joining the Scuderia – which has been rife for much of the Englishman’s glittering F1 career – feels a distant memory.

Hamilton still hasn’t signed a new contract for 2021, although he is expected to imminently. Even if not, a blockbuster Ferrari swoop is now certainly off the table due to their decline from title challengers to midfield runners, and their new driver line-up. “I don’t think there will be regret because at the end when we took some decisions, we took them thinking they were the right decisions and today we have a fantastic driver like Charles where we invested a lot as Ferrari,” explained Binotto.

“I think he’s got a lot of talent. If he’s got the right car, I’m pretty sure he can challenge Lewis Hamilton.

“We’ve made our choices, and I think together with Carlos we are very strong. I don’t think there will be any regret.”

The new F1 season is set to start on March 28 with the Bahrain GP after the Australian GP was postponed back to November.