George Russell and Sebastian Vettel enjoyed a funny exchange as the two inadvertently bumped into each other in the Dutch Grand Prix pit lane. Russell left Sky Sports host Rachel Brooks in a fit of laughter after pushing Sebastian Vettel out of the way of the camera while he and Brooks were mid-conversation.

Vettel was seemingly searching for someone in the pits but stopped right in front of Russell as he was conducting a TV interview. Russell tapped the Aston Martin star on the chest before turning him around and pushing him out of the way.

Russell said: “Excuse me, can you get out of the shot.” Vettel grinned after the incident as he quickly walked back to his pit garage.

Sky host Brooks laughed as the pair engaged in the amusing exchange in Zandvoort. Russell secured his best result of the season after a bold call to switch to soft tyres during a late safety car. 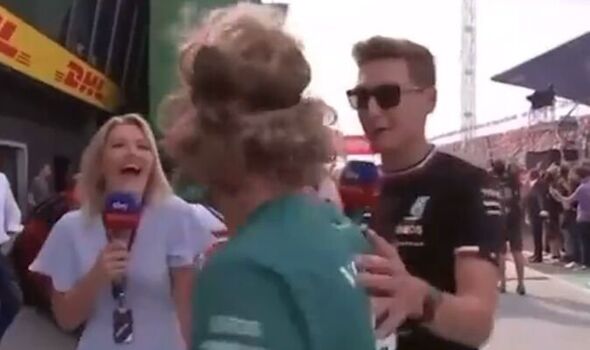 Mercedes had initially kept both Mercedes on track but Russell realised he would be caught by Max Verstappen and Charles Leclerc and opted to stop. The decision meant Russell was handed the faster tyres instead of race leader Hamilton at a crucial phase of the race.

It took Russell just one lap to pass Hamilton as the seven-time champion dropped to P4. It’s the former Williams star’s sixth podium of the season and his third in four race weekends.

The result ensures he extends his championship advantage over Hamilton by a further six points. It means he will enjoy a 30-point lead over his more experienced team-mate at the Italian Grand Prix with just seven races remaining. 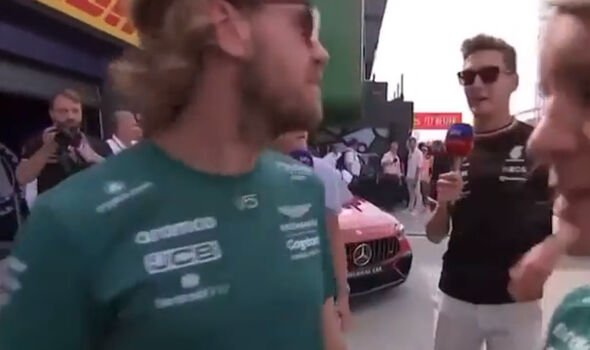 Hamilton was furious with his Mercedes team during the race, swearing at race engineer Peter Bonnington. The seven-time champion also appeared to ignore Russell in the pit lane moments after the chequered flag.

Hamilton later congratulated Russell in an Instagram post last night hours after claiming Mercedes could have won the race. But, Russell disagreed, claiming the Silver Arrows did not have the pace to challenge Verstappen regardless of which strategy they were on.

He explained: “I think what would’ve happened if we both stayed out is that Max would’ve won the race and we would’ve probably finished behind Charles as well.”