British Grand Prix: A preview lap of the race track

Lewis Hamilton has warned Mercedes needs to make “some improvements”despite a record breaking podium at the British Grand Prix. Hamilton said he lost a bit of time in the pit stop and stressed the team needed to “keep pushing” to close the gap to Ferrari and Red Bull.

But, the result still means Hamilton has broken another F1 record, securing his 13th podium finish at a single venue. He said: “I was trying to chase down those Ferraris but congratulations to Carlos. They were just too quick, today for us and at then end I was in amongst that battle with Checo.

“Those guys were just too quick on the straights for me today… We’ve made a step closer to them so we have to keep pushing. When asked on whether he was struggling on either of the compounds, Hamilton added: “No I mean we lost a little bit of time in the pit stop and then I was chasing and chasing.

“But the pace was great on both sets of tyres and at the end it was a little bit difficult when you get a Red Bull behind you. They are so fast on the straight. We’ve got some improvements to make but this is a huge bonus for us.” 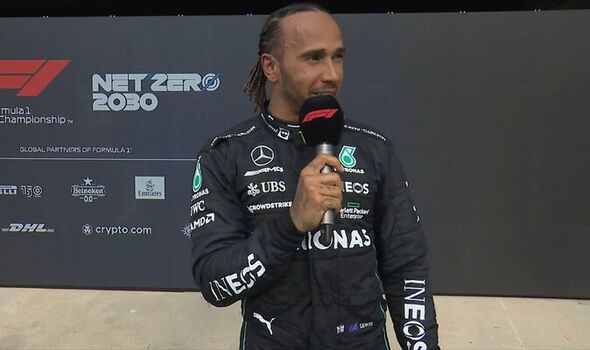 Hamilton appeared to criticise the team’s strategy calls straight after the race on team radio, claiming Mercedes had to “sharpen up”

He added: “That was a tough one guys. A great effort. We’ve got to sharpen up all around, but thanks so much for the hard work. Good points.”

It looked as if Hamilton could challenge for the win during the opening stages as he closed up on the Ferrari’s on an alternative strategy. A pit stop error cost him a chance to fight with Sainz and Leclerc but a late safety car gave him another shot.

The seven-time champion was third on soft tyres but lost out at the restart to Serfgio Perez. An epic three-way fight between Hamilton, Perez and Leclerc for the final podium places then raged.

However, Hamilton got the better of the Monegasque at Stowe with a handful of laps remaining. He was closing in on Perez at the end of the race but ran out of laps to make a dent in the gap.

There was hope Hamilton could be promoted to second after the race as Sergio Perez was investigated for running wide and gaining an advantage. But, the Mexican held onto position after the stewards admitted there would be no further action at the chequered flag.