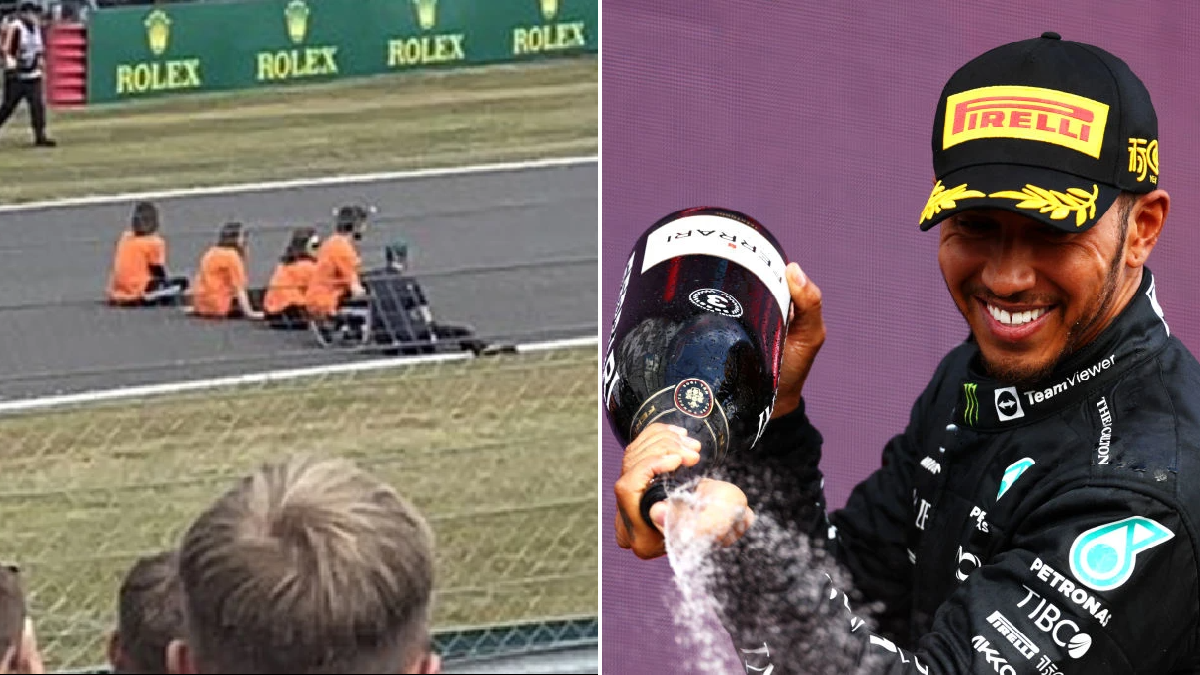 Lewis Hamilton has backed the Just Stop Oil protestors who managed to get onto the track at Silverstone on Sunday, saying: ‘Big up those guys.’

A group of the activists managed to break onto the track and sat there during the British Grand Prix, with a red flag having just been waved after Zhou Guanyu’s terrifying crash.

Luckily no one was hurt as a result of the protest, although it as an extremely dangerous thing to do, but Hamilton has backed the environmentalists for taking action.

Asked to clarify his initial reaction to the protestors, Hamilton explained: ‘I just said, big up the protestors. I love that people are fighting for the planet and we need more people like them.’

The British driver finished third at Silverstone, with Carlos Sainz winning a Grand Prix for the first time and the Spaniard was much less supportive of the protestors.

‘People have the opportunity to speak out, because it is their right, but I don’t believe jumping into a Formula One track is the best way to do it,’ said the Spaniard.

‘You put yourself and the drivers at risk. You have to be more careful, because you could get killed and generate an accident.’

A statement on Twitter from Just Stop Oil which promoted the protest read: ‘A group of supporters of Just Stop Oil have stormed the track at #BritishGP2022

‘If you are more outraged about this disruption than our world being burnt before our eyes, then you need to get your priorities straight.

‘We demand the government calls an immediate halt to new oil and gas projects in the UK and we will continue to disrupt sports, cultural events and oil until this demand is met.

‘How many more young people have to step up before the government will listen?’

Northamptonshire Police’s event commander, Tom Thompson, said: ‘I’m really disappointed that this group of people ignored our warnings prior to race day and made the incredibly dangerous decision to enter the track.

‘We offered to facilitate a peaceful event at the circuit but they instead chose to put the lives of the drivers, marshals and volunteers at risk. It is incredibly disappointing that anyone would make the decision to do this. Thankfully we had plans in place, and the group were swiftly removed and arrested by our officers. All seven are in custody.’