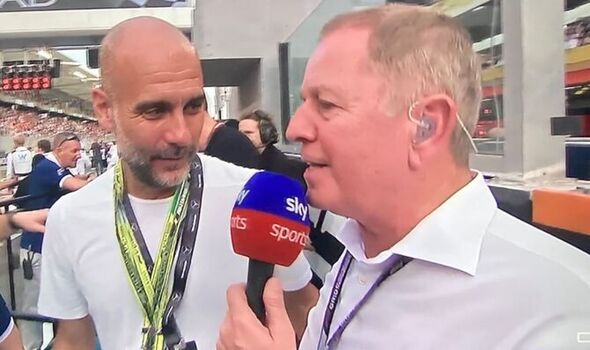 Sky Sports pundit Martin Brundle was involved in awkward exchange with Pep Guardiola on his grid walk before being “thrown out” of the interview altogether. Brundle’s last grid walk of the season in Abu Dhabi saw him chat with Daniel Ricciardo, Usain Bolt and Norbert Vettel along with a few members of England’s cricket team.

Looking for one final famous person to chat with, Brundle spotted Guardiola towards the front of the grid by Verstappen’s car and waded through the crowd to get a word with the City boss. The former F1 driver introduced himself with Sky Sports F1 before Guardiola quickly replied: “I spoke already with Sky.

“I just spoke twice with Sky.” Brundle then began asking Guardiola about City’s season, but the Spaniard was in no mood to speak about his team.

Just as Brundle tried to change the subject to today’s race, Guardiola was quickly whisked away and the Sky Sports pundit was left in an awkward situation. “Hang on a minute,” Brundle could be heard saying as he was pushed around.

He then held his hands up in an attempt to defuse the situation, before adding: “Okay, I’ve been thrown out of better places than this.”

While Red Bull, Ferrari and Mercedes will be gunning for the race in to end the 2022 season, most of the focus was on Sebastian Vettel before his retirement. The four-time world champion was given a guard of honour by his peers ahead of the Abu Dhabi Grand Prix starting.

And many have paid tribute to the German driver this week with Toto Wolff explaining how Vettel “set the bar”. Wolff said: “He set the bar high, the way he worked and got himself in the position to be in the best car and outscore everyone four seasons in a row. That was really impressive.”

The 35-year-old starts his final race in ninth just ahead of Fernando Alonso, who will replace him at Aston Martin next year.