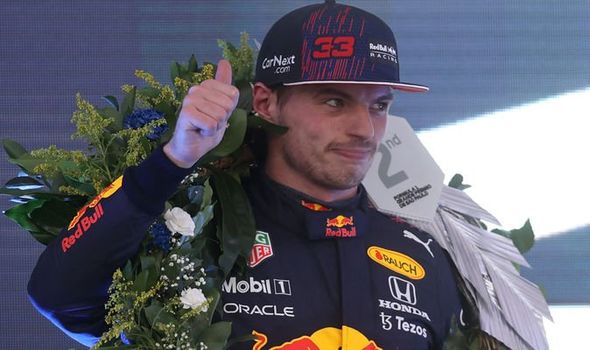 Max Verstappen has warned Lewis Hamilton that Red Bull will bounce back after failing to capitalise on Mercedes’ punishments over the Brazilian Grand Prix weekend. Hamilton was disqualified from Friday’s qualifying session meaning he had to start the sprint race from the back of the grid.

The seven-time world champion from 20th to fifth place during the short 24-lap event on Saturday.

However, Mercedes also switched Hamilton’s engine in Brazil so he was hit with a further five-place grid penalty for the main race, meaning he started 10th.

In contrast, Verstappen started on the front row but he crossed the chequered line after his main title rival.

“We tried everything we could today of course. It was a good battle but at the end we just missed a little bit of pace,” Verstappen said. “We gave it our all today, it was a lot of fun.

“We still have a good points lead. Today was a bit of damage limitation on a weekend that was difficult for us. I’m confident that the coming races we will bounce back.”

Hamilton refused to be put down by the strict FIA punishments he received over the weekend and he explained how he was able to overcome the setbacks.

“What a race!” he said. “The team did an amazing job. Valtteri did a great job to get as many points as possible.

“Coming into this weekend I never ever thought we would be able to close the gap like we had today.