However, Ricciardo said he sent the pair some free items after Mundt searched for the clothes online. The McLaren driver told Autosport: “I’ll give you the story, it’s a feel-good story, one for the grandkids! So he won’t mind me saying this.

“So he texted me one Friday night. And it was a picture of his girlfriend on the couch, looking up the RIC3 shop. And he was like, ‘Mate, what’s going on?’ And I was like, ‘Tell me what she likes. I’ll send her a few things.’ So we sent a few things. 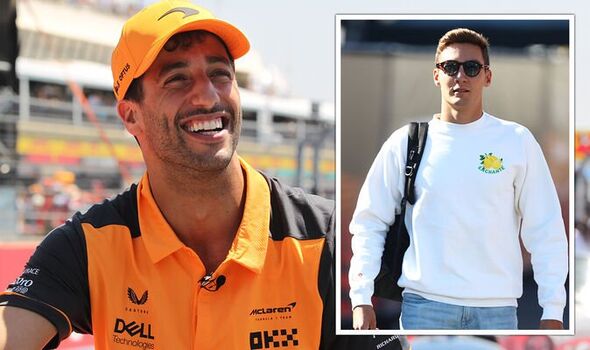 “I guess one of them actually fits George, so he decided to wear it today. It’s good, George is a good lad. I like the kid!”

Russell posted an image of himself wearing the top on his Instagram last night, adding the caption: “Paid partnership with @danielricciardo” followed by a laugh emoticon. He posted the same image again on his Instagram feed alongside the words: “Feeling fresh for Zandvoort.”

Ricciardo responded to the remark, adding: “Russell George you’re so hot right now.” It’s not the first time Russell has donned Ricciardo clothing during his time in the paddock.

The pair posed for an image while Russell was wearing a Ricciardo cap at the 2020 Turkish Grand Prix. 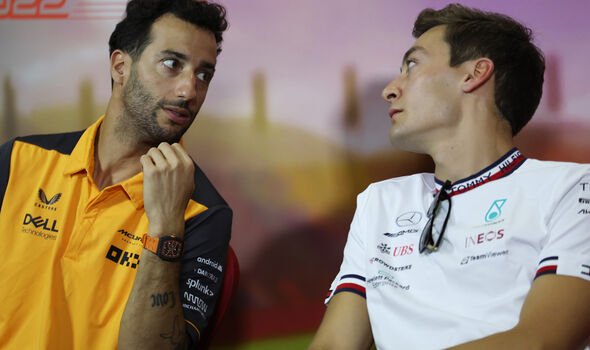 Underneath the image, Russell said: “Proud @danielricciardo ambassador. Thanks for the hat bro.” Russell appears to have thrown his support behind Ricciardo since his McLaren contract was axed after the Hungarian Grand Prix.

The Mercedes star was seen sitting next to Ricciardo on the grid before the Belgian Grand Prix alongside Mick Schumacher and Alex Albon. Ricciardo also defended Russell’s push for rule changes to combat porpoising issues earlier on in the season.

The McLaren driver said he was sympathetic to those in bouncy cars after admitting he was in pain after the Azerbaijan Grand Prix. He said: “It was, simply putting it, painful. It’s painful – but I guess like, unnatural. It’s literally like someone’s bouncing you like that, like a pro basketball player when they get the ball really low.”