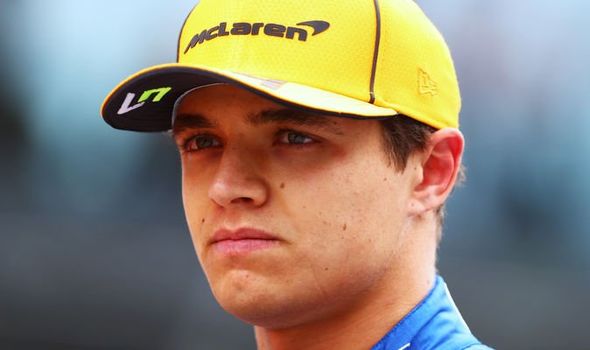 McLaren have revealed that an agreement is in place with Mercedes to borrow a reserve driver, likely Stoffel Vandoorne, of theirs if Lando Norris is issued a one-race ban at some point this season. Norris was deemed to have run Red Bull’s Sergio Perez off track at the Austrian Grand Prix last time out at the Red Bull Ring.

The Briton was issued a five-second time penalty and was also hit with two penalty points, which has taken him up to 10.

With points counting across a rolling 12-month period, Norris’ tally will drop to eight at the British Grand Prix with two points expiring before the race at Silverstone.

But Norris will still be on eight until the middle of November, leaving McLaren at real risk of being without their form driver for a race.

The 21-year-old has been brilliant this season with three podiums putting him fourth in the Drivers’ Championship after nine events.

Yet McLaren team principal Andreas Seidl says an agreement is in place with Mercedes for Vandoorne to likely come back into the team temporarily.

The Belgian drives for Mercedes in Formula E but formerly raced full-time for McLaren for two seasons in 2017 and 2018, picking up 25 points when the Woking-based outfit were much slower than they are now.

“It is not reassuring. There is a fundamental risk,” Seidl admitted to RTL of the possibility that Norris will be hit with a one-race ban, insisting the sport should “fundamentally consider whether this point system should not be reconsidered”.

He also said: “It cannot be in the spirit of Formula One that a driver has to sit out a race for the kind of incident we saw in Spielberg.”

But Seidl confirmed if McLaren endure the worst case scenario: “We have an agreement with Mercedes regarding the reserve drivers.”

He added that Vandoorne is the “first choice” rather than Nyck de Vries, the Dutchman also driving for Mercedes in Formula E who was in the McLaren Young Driver Programme from 2010 to 2019.

Norris has meanwhile called F1’s penalty points system into question, insisting punishment should only be handed out for “dangerous” driving.

He said: “Why should I deserve penalty points today for someone going into the gravel? Yes, nothing I’ve done is dangerous.

“Maybe in some cases you deserve an on-track penalty, because you’ve done something bad in terms of racing and you just made a mistake.

“But then you have things that people do every now and then which are purely dangerous.

“If you do genuinely overtake [under] a yellow flag and do something else that’s clearly a rule that will put people in danger then I understand penalty points for a driver.

“And if that adds up you get a driver ban or race ban, but for little things like this, it’s stupid in my opinion. It’s not what Formula One should be.

“In my opinion, they should be decisions about when someone’s done something dangerous and put someone in harm’s way and done something that they shouldn’t have done, and then you have racing and when people have to use common sense.

“Like, my approach of the incident in Baku with the red flag and not boxing when I should have done.

“I didn’t put anyone in harm’s way, in fact it was the opposite and I did everything safely. Why should I deserve penalty points for that?”

Yet FIA race director Michael Masi responded: “To be fair it’s a penalty point system that exists, it’s been there all the way through, no different to those driving on the road in countries that have a maximum number of points they have to abide by and they have to adjust their driving style accordingly.

“So, no, I don’t think they are harsh. It was discussed late last year and it’s funny because it affects different drivers in different teams in different ways.

“And the consensus was, at the end of last year involving everyone, the teams, the FIA, everyone, that there shouldn’t be a change this year and it’s not something we’d ever change mid-year.

“The penalty scale is something the teams all agree upon and actually have input on at the start of the year, [and that] is what the stewards use.”