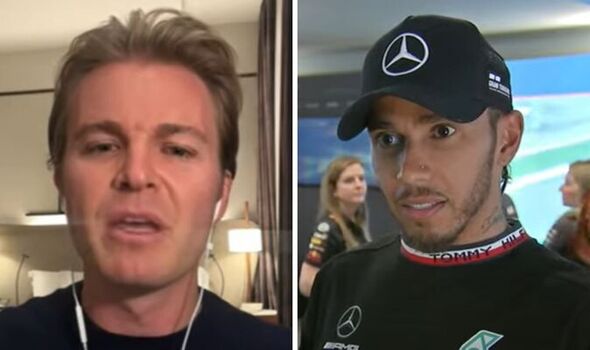 Nico Rosberg doesn’t see Mercedes hitting the ground running in the 2023 season, warning Lewis Hamilton that it will take a few races for the team to find their feet. The season finale Abu Dhabi Grand Prix summed up Mercedes’ disastrous season with Hamilton retiring from his first race of the year while neither he nor George Russell were showing competitive pace.

Both Hamilton and Russell have since admitted that they’re looking forward to turning their backs on the troublesome W13 and look ahead to 2023. Toto Wolff has promised Mercedes fans that they will be “back” towards the front of the grid next season, challenging Red Bull and Ferrari.

But there will be plenty of work needed to close the gap to Max Verstappen, who nearly picked up as many points on his own as Hamilton and Russell combined this past year. Rosberg does point out that Mercedes were on an upward trajectory towards the end of the 2022 season, culminating in a spectacular win for Russell in Brazil.

However, the 2016 F1 champion has highlighted where Mercedes are still lagging in performance compared to their rivals. And he doesn’t think Mercedes will go into the Bahrain Grand Prix in March ahead of Red Bull or Ferrari.

“A lot of it will come down to them still struggling with drag on the straights,” he told Sky Sports. “The car inherently has more drag than the Ferrari and Red Bull so it doesn’t cut through the wind as well as on the straight.

“That’s something that they still need to try and figure out. I think that’s the last key that is missing in order to really challenge for wins and championships next year.

“Now, are they going to – in these next couple of months over the winter – sort it out? My bet would be that even next year they will start a little bit behind. This year they spent so much time figuring out the problems on the car rather than moving forward and developing the car.”

Hamilton is still yet to commit his future to Mercedes beyond the 2023 season. But the 37-year-old has repeatedly stated that he’s ready to sign a new contract with the Silver Arrows.

Hamilton confirmed just last month that he plans to sign a “multi-year” deal with Mercedes during the off-season. “I’m not putting a limit on it to be honest,” Hamilton said.

“I’m planning to do a multi-year deal with my team. I really, really don’t know what the next five years (hold). I think we’re still trying to work on that.

“There are a lot of great things being put in place, like I just launched a production company this week, but I feel great in my mind and body. I want to continue, I think there’s more stuff for us to achieve together so I want to be here longer.”