Qatar Grand Prix LIVE: Lewis Hamilton leads at Losail after perfect start but title rival Max Verstappen is chasing him down after romping from seventh to second inside FIVE laps… with F1 title battle hotting up in the desert

Lewis Hamilton and Max Verstappen’s exciting F1 title battle resumes in Qatar on Sunday with the Mercedes man on the front of the grid.

Hamilton had qualified ahead of his Red Bull rival at Losail on Saturday, with Valtteri Bottas in third – meaning both Mercs are on the favoured side of the grid.

But Verstappen – who had qualified second, alongside the Brit on the front row – was given a five-place grid penalty for ignoring yellow flags and dropped to seventh, with Bottas also penalised in another dramatic twist.

Join Sportsmail‘s Max Mathews for live Formula One coverage of the Qatar Grand Prix, including build-up, lap-by-lap updates and result.

Bottas moves up to 7th, and he gets a word of praise from Mercedes on the blower.

They want the Finn up to third, firstly to help out Lewis with Max and Perez putting the pressure on, and also for the constructors’ championship!

Perez moves up to fourth…

Lewis is six seconds clear of Max in second, and 20 seconds – over a pit stop – ahead of Alonso in third.

Six points in the live drivers’ championship rankings as it stands, with the Brit also getting a point for the fastest lap.

Pretty much the perfect start for Lewis.

Praise for Valtteri! He’s up to ninth from 11th in quick-time. A couple more to go yet for the Finn if he wants to help Lewis out…

Max – who is five seconds behind Lewis now – being told to be careful with his car.

The track is rough on these vehicles!

Mercedes URGING Valtteri to overtake the cars in front of him and help out Lewis!

That’s quite the direct order, isn’t it, giving him the hurry-up!

Bottas does tend to get stuck behind big groups of cars, unlike Hamilton who can race through the field. But he’s up to P10 now…

After all that talk about Verstappen being dropped from second to seventh for a penalty, he’s made up those five places inside five laps!

Lewis Hamilton wondering where his team-mate is on team radio.

He feels he needs backup!

Answer: He’s back in 11th. Miles away. You’re basically on your own, Lewis.

Damn. All of a sudden, Verstappen has overtaken Alonso AND Gasly and is now in second!

Only Hamilton ahead of him…

Max moves up! Gasly makes a mistake and Max has an easy overtake into P3.

Max is pretty hemmed in back in fourth!

But Hamilton’s team-mate Bottas drops from sixth to 11th! That’s not what Lewis needs!

He wants the Finn up and around the front to help him out with the Red Bulls.

Lewis leads after the first lap!

Max Verstappen is up to fourth after a brilliant start!

Pierre Gasly takes advantage of Verstappen’s penalty to go P2 on the grid, next to Lewis, with Fernando Alonso in third, followed by Lando Norris and Carlos Sainz.

The odd numbers on the grid are thought to be in cleaner air, with the even numbers (on the right) having to go through the dirty side of the track.

Seconds away here – they’re on their formation lap! 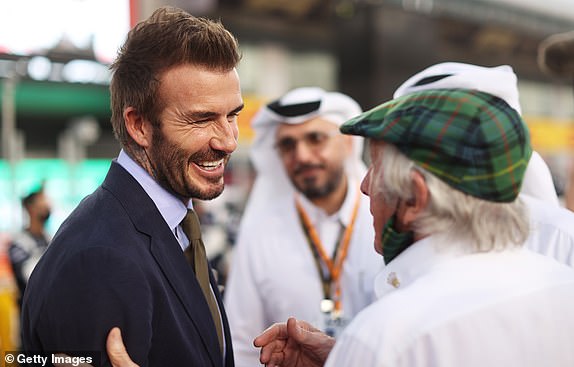 Not long left! The tension is buillding…

Grab a cup of tea and get back in front of this blog, ladies and gents, because this is gonna be epic.

Lewis Hamilton, activist as well as driver, is donning a rainbow helmet today to raise awareness of the country’s questionable record on human rights and equality.

Hamilton also called for scrutiny of the issue. Sport can be a force for good – great to see from Lewis.

But now to Qatar…

Three races left, the first in Qatar, this afternoon.

And the title race is tight as anything…

But Mercedes feel hard done by too!

They reckon – not without justification – that Max should have been handed a penalty for looking like he ran Lewis off the road.

Red Bull chief Christian Horner (Geri Haliwell’s husband) and Toto Wolff (no idea who his spouse is, if he has one) are going head-to-head as much as Max and Lewis are.

And they’re not the best of friends.

Horner admitted there is ‘no relationship’ between them, and said: ‘I don’t need to go to dinner with him or kiss his a**e’. Ouch.

Let’s bring you up to speed…

…so to speak. Lewis was ultra-quick in Brazil, with Mercedes hoping he can keep that up for the rest of the season.

Great question. Lewis Hamilton worked his way through the field, finally facing up to Verstappen, who was leading, in Sao Paulo before making his way past him for the win.

It was a stunning drive, up there with his best ever, and it leaves the title race fascinatingly poised going into today’s race.

This is exciting, innit.

It wasn’t really controversial – Hamilton was penalised for the same thing earlier this season – and Verstappen clearly failed to reduce his speed after the yellow flags came out.

More frustratingly for Max, the stewards only decided on the punishment 90 minutes before the race… not long to change your race strategy!

But that’s all changed…

Good afternoon, hello and welcome to today’s coverage of the Qatar Grand Prix, brought to you by Sportsmail.

There are three races left, two title rivals and one big question: Can Lewis catch Max?