Sao Paulo Grand Prix Sprint race LIVE: Brazil plays host to F1’s final sprint of the season as Lewis Hamilton starts from the BACK of the grid after he was disqualified from qualifying with title rival Max Verstappen lining up on pole

The sprint qualifying race will make its third and final appearance of the 2021 Formula 1 season during the Sao Paulo Grand Prix, and Sportsmail is on hand to bring you all the action as it unfolds.

Mercedes ace Lewis Hamilton starts from the back after he was disqualified from qualifying for a technical infringement in relation to his DRS.

Max Verstappen now starts from pole and could take a huge step towards the drivers’ championship this weekend.

Follow Sportsmail’s Kieran Lynch for live coverage of the Sprint race ahead of Sunday’s Brazilian Grand Prix, including build-up, lap-by-lap updates and result.

This is the third time that there has been a Sprint Race this season, both of which were fairly calm…only for their to be drama in the Grand Prix on Sunday.

Max Verstappen won the first Sprint race at the British Grand Prix only to crash with Lewis Hamilton on Sunday with the Brit taking the important victory.

Then at Monza, Valtteri Bottas beat Max Verstappen on Saturday with the Dutchman crashing with Hamilton again on Sunday leading to both men retiring from the race.

The drivers are starting to flood onto the grid with the Sprint race getting underway at 7.30pm

Red Bull chief Christian Horner has been speaking to Sky Sports and said: ‘I would not be surprised to see Lewis in the top 10 in this race.

‘You can never rule them out. Here, anything can happen. We’re not taking anything for granted.’

The cars have been out on track already today, with Fernando Alonso in the Alpine putting in the quickest time of the hour-long session.

He starts ninth on the grid so it’s very unlikely he’ll have the speed to compete at the top this weekend.

Max Verstappen and Valtteri Bottas rounded out the top three while Lewis Hamilton was fifth behind the second Alpine of Esteban Ocon.

So going into the weekend Max Verstappen has a 19-point lead over Lewis Hamilton with four races remaining.

Should the Dutchman win and Hamilton not somehow climb up into the top three in 24 laps today, then he will extend that gap to 22 points going into tomorrow’s race. So there is a chance that he could be more than a win ahead of the Brit at the end of the weekend.

Also, if the top three today on the grid finish in the same order, Red Bull will overtake Mercedes in the constructors’ championship.

Mercedes did have the opportunity to appeal today’s decision but have decided against it as they aim to win the championships ‘on track’.

The infringement is a huge error for Mercedes with Hamilton looking to close a 19 point gap to Verstappen and they will have to hope the Brit gets them out of trouble with some brilliant drives both today and tomorrow.

Valtteri Bottas’ job has become even more significant this weekend as Mercedes will be very keen for him to take points off Verstappen both today and in tomorrow’s Grand Prix.

A worst case scenario for Mercedes is if Sergio Perez gets the jump on Bottas at the start.

For Hamilton he has 24 laps to climb through the field today and place himself in the best possible starting position for tomorrow – taking his five-place penalty on Sunday into account.

Max Verstappen was also under investigation by stewards after he broke parc ferme rules by touching Lewis Hamilton’s rear wing after qualifying yesterday.

He was fined £43,000 and in a statement the FIA said there was ‘insignificant force’ when the Dutchman touched the car.

Hamilton’s disqualification means Verstappen will start on pole and this could be a huge opportunity for him to take a significant step towards his first drivers’ championship. 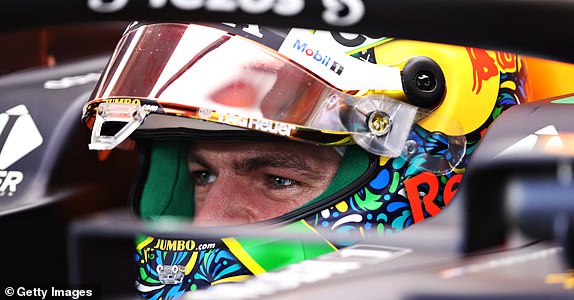 Lewis Hamilton was fastest in yesterday’s qualifying session but he has since suffered a huge blow to his aspirations of winning this year’s championship.

The Mercedes driver has been disqualified from qualifying for a rear wing infringement and he will start the race from the back of the grid for today’s shortened race.

Just to make matters worse wherever he finishes today, he WON’T start in that position tomorrow. As he also has a five-place grid penalty for an engine component change.

How he climbs up the field today could be a championship critical moment.

To read more on the latest developments click below

And welcome all to Sportsmail’s live coverage for today’s Sprint Race ahead of the Sao Paolo Grand Prix.

Just a reminder that the order of today’s race will decide the grid for tomorrow’s race.

And if you haven’t been keeping yourself up to date with the news since yesterday’s qualifying session, it’s safe to say you’ve missed a lot…