Concerns about travel restrictions due to the coronavirus outbreak may put Ferrari's participation in next month's Australian grand prix in doubt.

The Italian giant has revealed it will seek assurances its staff will be allowed to travel, and not face quarantine restrictions, before heading to Melbourne for the March 15 season opener.

An outbreak of the virus in Italy has already created havoc with several sporting events across the country. 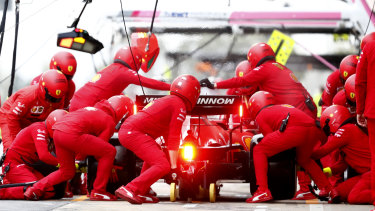 Ferrari says it wants to protect its employees.Credit:AP

Serie A and European football fixtures have been affected while Italy's Six Nations' rugby match against Ireland has been postponed.

After facing difficulties getting staff members to this weekend's Bahrain F2 test, Ferrari team principal Mattia Binotto said his team would need confirmation from F1 and FIA officials that there would be no surprises before allowing staff to travel to Australia.

"What we will need is simply to have assurance before leaving," Binotto told Motorsport.com.

"If there are any medical screenings, we need to know about them. You need to know exactly what's about. We need to understand what are the consequences in case of any problem.

"Obviously we need to protect our employees. We have got collective and individual responsibility towards them. And it's important, really, to make sure that before leaving, the picture, whatever is the scenario, is known and clear."

Binotto said with Ferrari providing assistance to Haas and Alfa Sauber as well as their own AlphaTauri team, any problems getting staff to Albert Park would expand well beyond their own garage.

"What will be the situation that if eventually four teams cannot run and if the race will take place or not? That is not my decision," he said.

Both F1 and the Victorian government are hoping to proceed with the grand prix as planned, though that stance could change depending on the global situation with the virus.