Zandvoort: Formula 1 championship leader Max Verstappen made quick work of a safety car restart to win the Dutch Grand Prix on Sunday in front of 100,000 adoring home fans, making it four straight wins for the first time in his F1 career.

Verstappen’s 10th win matched his tally from last year and the Red Bull driver extended his championship lead to 109 points. 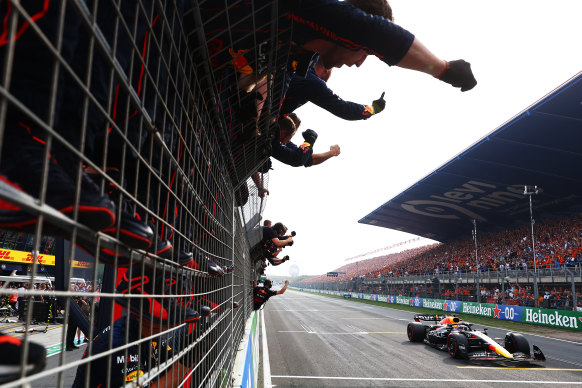 With seven races left, a second straight title is looking increasingly likely as his challengers – Ferrari’s Charles Leclerc and teammate Sergio Perez in joint second – continue to fall further back.

Verstappen looked to be coasting to victory when a safety car came out on lap 56 after the engine cut out on Valtteri Bottas’ Alfa Romeo.

Verstappen changed tyres and was behind leader Hamilton’s Mercedes with 12 laps left.

But Hamilton was on a slower medium tyre and Verstappen on the quicker softs – leaving the British driver pretty much a sitting duck, much like when he lost the title to Verstappen at last year’s season-ending Abu Dhabi GP.

Hamilton misjudged his restart and Verstappen overtook him straight away to bring a huge roar from the Orange Army. The Dutchman also took an extra point for the fastest lap.

An angry Hamilton took it out on his team, using an expletive on radio to tell them he wasn’t happy about not swapping for new tyres under safety car, when Russell had.

Hamilton appeared to brake late when Russell overtook him and they nearly collided. Hamilton could no longer contain his rage and unleashed another expletive-laced rant.

It got worse as Leclerc overtook Hamilton to move into third on an otherwise poor day for a Ferrari team unable to cut out the most basic errors.

Leclerc started from second ahead of Carlos Sainz jnr in third. Sainz crossed the line in eighth and got a five-second penalty for an unsafe release in the pit lane.

Earlier in the race, Ferrari botched Sainz’s tyre change on lap 15 – taking 13 seconds – in a season of bizarre incidents.

This time the tyres were not even ready. “Oh my God,” a stunned Sainz said.