If Gryan Miers scores the winner for Geelong in Saturday’s grand final, it will bug Sydney doubly to know that his unique kicking style is modelled on their great Lance Franklin.

“It came from actually copying ‘Buddy’ when I was kid because I could kick further and gain extra distance kicking like that when I was a little tacker,” Miers said. “Then it just kind of developed into what it is today. I’ve worked on a few things, so it is a bit more accurate than it used to be, and [now] it’s my own thing, I guess.”

There is more to Miers’ football than his curvaceous kicking action. His tireless end-to-end running is one of several ways in which the Cat have improved this year, so that the nearly team of the last two years are favourites to win an overdue premiership this year.

But Miers and his kicking will continue to excite comment for as long as he plays. It is like his Christian name, not seen every day.

“That kicking action turns heads pretty quickly. That’s most people’s first reactions, including teammates,” said Dan O’Keefe, who coached him for two years with the Geelong Falcons in the TAC Cup. “At TAC Cup level, he was still quite efficient. And he was extremely nousy around goals.”

O’Keefe decided there was neither time nor cause to re-train his kicking. “We felt he had certain attributes, particularly with his running capacity, that were really draftable,” he said. “So we focused on those. We felt if we tried to straighten up his kicking, it might have meant going two steps back to go one step forward. We didn’t have that time.” 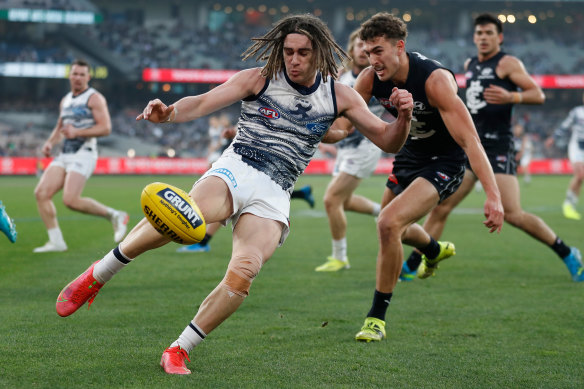 For thoroughness’ sake, O’Keefe asked Nathan Murray to have a look at the way he kicks. Murray, from Colac, won the 1987 Sunkick while playing for Geelong’s under 19s and continued to impress with his kicking in an eminent country career. “It was my weapon, I suppose you’d call it,” he said. “I just loved the art of kicking the footy.”

Murray wasn’t tempted to re-engineer Miers’ action. “Players like Gryan have been doing it since they were knee-high to a grasshopper,” he said. “You can tinker with their technique a little bit, but you can’t change their style. It’s a bit like ‘Buddy’: he does what he does. 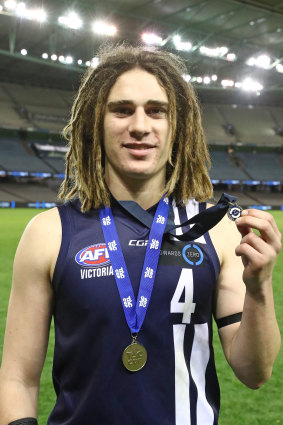 “If he’s kicking around the corner, as long as he’s got the ball upright, and the foot and the hand and the ball all line, that’s all that matters. It’s like a golf swing. You can have a beautiful swing like Ernie Els, or you can have a shocking swing, but as long as the connection point is the same, if it works, it works.

“It’s not a beautiful technique, but let’s work on consistency in what you do.”

O’Keefe remembers that while Miers kicked some grubbers in his TAC Cup years, he also kicked plenty of goals, including seven on Bailey Smith in the grand final.

“Three of those seven goals, no one else could kick,” O’Keefe said. “He had no right to even think about kicking a goal, let alone nail them. He kicked three literally from the boundary line. One was running away from goals. He bends it both ways. He’s a unique player.”

One of Miers’ teammates in that premiership, incidentally, was Tom McCartin, whose path he is sure to cross sometime in this AFL grand final. 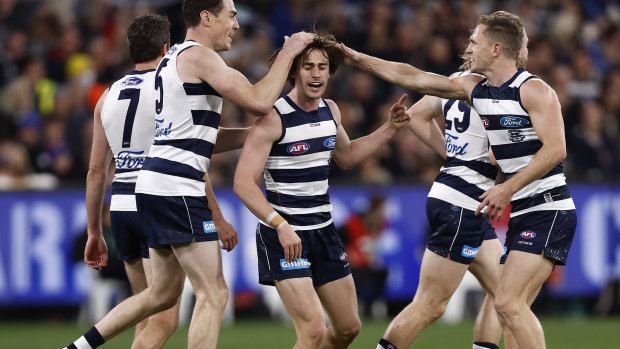 “I knew it worked, so I was always confident,” he said. “I had kicked seven in a grand final using it, so I knew what to do with it, but I wasn’t accurate enough on the easy ones whereas other players were so I had to work on that side of things and I’m getting there.

“Every coach I have had has tried to change it in a way – especially the first year I was here – I was a pretty inaccurate short kick, but I was always good at the hard kicks.”

Four senior seasons later, his output is even and reliable, he is one of the Cats’ first picked and the way he sweeps the ball rather than kick through it is merely an exclamation mark on what he does.

“It’s one of those things,” said O’Keefe. “Steve Smith wouldn’t be the best batter in the world if he was conventional.”