A year away from football due to injury could help James Sicily take “three steps forward” in 2022, according to new Hawks coach Sam Mitchell, who has lauded the defender’s improvement.

Sicily had his entire 2021 campaign ruined by a knee injury and subsequent surgery, but Mitchell said the year off could inadvertently help Sicily, who is likely to be in the captaincy mix in the new year. 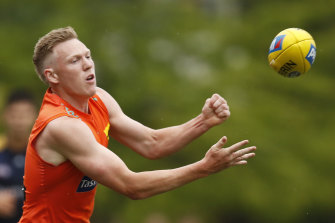 “He has a great presence on the track. He would be available to play if we were playing now,” Mitchell said.

“We are not too much in a rush with getting him to do everything but, certainly, he is ready to go. Even just at the end of training, everyone is tired and fatigued, he was just figuring out, he keeps missing a certain type of kick and he is asking: ‘Why am I missing that, how do I improve that?‘

“That mentality he has, to get the best out of himself, is a real step forward.”

Sicily, who can be overly emotional on the field, will strengthen a defence that held up well last season. Opponents scored just 42 per cent of the time they went inside 50, the fifth-best ranking, in a year the Hawks had issues at stoppages (they were ranked 17th in points differential in that area) and scoring.

“We look at the last 12 months, he [Sicily] has spent an enormous amount of time with Chris Newman, in particular, our defensive coach. I think that one step back of missing a season to take three steps forward is, hopefully, what we are going to get out of ‘Sis’ this year,” Mitchell said.

Sicily was not the only player of note to take to the track at the Hawks’ first official day of pre-season training on Monday. Jack Gunston, who managed only one match in 2021 because of serious back issues that required surgery, was also in action.

The lean Gunston remains on a limited program but enjoyed a significant moment at training.

“Jack did some ball work today for the first time which was great,” Mitchell said.

“The boys all got around him which embarrassed him a bit, which was good as well. But he is certainly running fast and is getting more involved in what we are doing.”

Top-10 draftee Josh Ward is ready for senior football and his athleticism was again on show as he and fellow draftee Ned Long won the two-kilometre time trial.

A decision on whether Ben McEvoy retains the captaincy won’t be made until the new year. Mitchell said leadership consultants Leading Teams will advise “pretty heavily” in this area. On-ballers Tom Mitchell and Jaeger O’Meara are also likely options.

Replacing a modern-day legend in Alastair Clarkson will not be easy, but Mitchell has an experienced team of assistants, including Newman, Robert Harvey (Mitchell’s idol as a youngster), David Hale and new head of development, Andy Collins, to help navigate what could be a bumpy path.

While Melbourne’s premiership players have declared they are even fitter now than what they were this time last year, Mitchell said the Hawks were not yet interested in any comparisons.

“I am probably not at the phase at the moment where we are comparing to the other teams. We are finding our own feet, we have a new coach, a lot of new coaches, a new environment, we are starting a new frontier really, so the challenge for us is to be the best version of ourselves,” he said.