State of Origin star Josh Addo-Carr will say goodbye to the Storm and move to Belmore for the 2022 season after signing a four-year deal with the Bulldogs.

The contract will see Addo-Carr at Canterbury through to the end of 2025 and is the latest signing in the Bulldogs' rebuilding effort. The deal worth more than $500,000 a season and makes Addo-Carr the highest-paid winger in the competition. 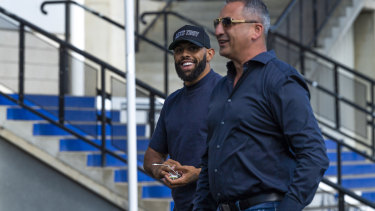 Addo-Carr will see out his contract with Melbourne in 2021, but had made it known he was eager to make the move from Melbourne to Sydney to be closer to family.

"I'm relieved to have finally sorted out my playing future and can now focus on making my last year with Storm another one to remember," he said via a statement released by the Storm.

Storm football boss Frank Ponissi said Addo-Carr informed the club of his decision to join the Bulldogs this week.

"Josh is an amazing talent on the field and brings his own unique enthusiasm and energy to our entire football club which makes him such an endeared character at Storm," Ponissi said.

"We were delighted when he decided to see out his contract with us but knew he would make the decision to move back to Sydney at some stage.

"While we wish him all the best on the move, Josh is very focused on giving himself and his team mates the best chance to prepare for the 2021 season with Storm."

"He's played almost every game in the four seasons with us so far and will no doubt become a 100-game player for Storm in 2021, which is a credit to him."

Addo-Carr said the decision to leave the Storm was a difficult one which was only made to be closer to his family.

"I'm relieved to have finally sorted out my playing future and can now focus on making my last year with Storm another one to remember," Addo-Carr said.

Under new coach Trent Barrett, the Bulldogs have also signed Nick Cotric and Kyle Flanagan for 2021 and Penrith's Matt Burton for the following season.