Huge stakes for both sides

This is a massive match for both teams. The Dockers could tighten their grip on a top-eight spot with five games to go if they win, while the Cats are an outside chance of claiming top spot if they’re victorious.

However, a loss could see Freo plummet from seventh to 12th while Geelong could drop outside of the top four to fifth if they suffered defeat.

The Cats certainly have the wood over the Dockers, winning five of their six meetings by an average of 45 points, including their last clash which took place at Optus Stadium. 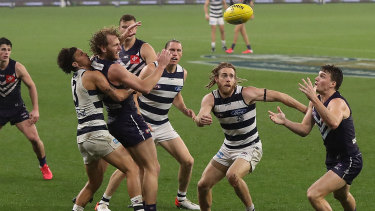 Last time they met: Cats give Dockers a bath

In driving and persistent rain, Geelong shot to third on the ladder by shutting out Fremantle at Optus Stadium on Monday night.

In conditions more often seen at Kardinia Park than in Perth, the Dockers narrowly avoided kicking their lowest ever score, with a late major to first-year midfielder Caleb Serong hauling his side past the 1.7 (13) posted against Adelaide in 2009.

On paper this was the easiest leg of Geelong’s three-game Perth stint. While the Cats’ list of absentees included Joel Selwood and Gary Ablett, the Dockers were still without dual Brownlow medallist Nat Fyfe, while the late withdrawal of Brennan Cox through soreness further decimated a Fremantle defence already without pillars Alex Pearce and Joel Hamling. 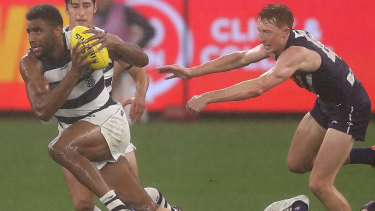 Hello and welcome to our rolling coverage of tonight’s blockbuster top-eight clash between Fremantle and Geelong from Optus Stadium.

And while much uncertainty surrounds round 18 – with as many as four games still without an officially confirmed venue – there’s no doubt about the fact that we are set for a cracking weekend opener.

With three wins from their last four games, the Dockers have moved up to seventh spot on the ladder, while the Cats are sitting in third, having won eight of their last nine matches.

This is Fremantle’s first prime time Thursday/Friday night game in five years, and it’s thoroughly deserved on the back of their recent formline.