Our experts give you the lowdown on the four crunch clashes that made up the first week of finals.

Richmond’s season has ended in a way that befits their season: with a narrow, last-minute loss in which they weren’t composed or disciplined enough for long enough. They have more than enough talent to regroup and challenge again, but for now, all eyes will be on Dustin Martin, who was a shadow of the player who has dominated previous finals campaigns. For the Brisbane Lions, winning a close first final is a monkey off their back, willed over the line by a performance for the ages by Lachie Neale. But their prize is a cut-throat semi-final against Melbourne, who have torched them twice already this year. – Andrew Stafford 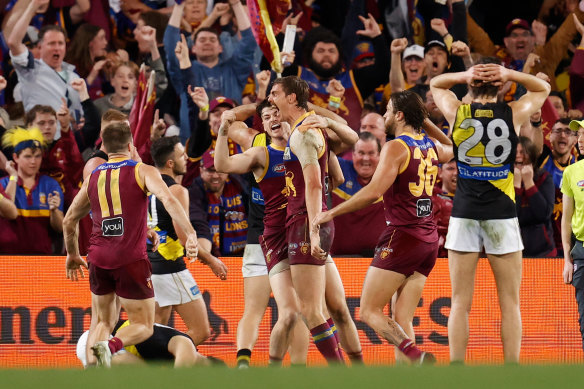 Joe Daniher broke Tiger heart with his goal to put the Lions ahead in the dying stages of their elimination final.Credit:AFL Photos

As Melbourne celebrated their third unanswered goal and shot to a two-goal lead early in the third quarter, Sydney’s Ollie Florent went into the centre square group and motioned for calm. The skipper Luke Parker gathered the group, then willed himself to win the next centre clearance. After fighting hard, Tom Papley kicked a snap goal when given a quarter of chance as the ball bobbed out of congestion. The Swans then kicked seven of the next nine goals to enter their first preliminary final at the SCG since 1996. The win was built on pressure and team. They won despite Lance Franklin being beaten and less than notable contributions from Chad Warner, Isaac Heeney and Logan McDonald. Melbourne, by contrast, have two major problems. Their midfield can’t connect to their forwards with kicks deep into the pocket, risk-averse when the rest of the competition has gone the other way. It makes rebounding harder, and they can set up stoppages to use their midfield strength to advantage. Melbourne’s top five players are great but drop away from there and Christian Petracca’s injury is a major hurdle to their premiership defence. They will likely risk Tom McDonald or include Sam Weideman when they face the Lions as they need a spark up forward. – Peter Ryan 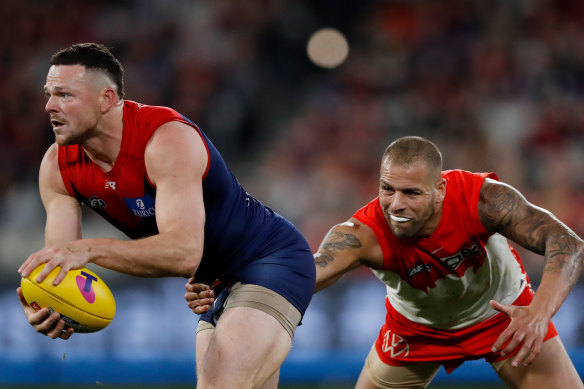 Steven May had the better of Lance Franklin but the Swans are through to the preliminary final.Credit:AFL Photos

Collingwood played better than Geelong in the qualifying final, but they could not win the key moments required to clinch the game. The main reason was Jeremy Cameron, who kicked three goals and had 12 score involvements to be the match-winner alongside Gary Rohan, who answered his critics with a huge mark and goal late. The ruck remains an issue for Geelong and they would need to consider Jonathon Ceglar for the preliminary final while Brandan Parfitt would be a good inclusion. Apart from Cameron, Rohan and Joel Selwood, it was their young or redefined players that had the most influence with Max Holmes, Sam De Koning, Brad Close, Zach Guthrie and Tom Atkins crucial. Collingwood’s best three were Darcy Moore, Scott Pendlebury and Jordan De Goey, but they struggled to contain Cameron and did not convert their chances inside 50, which is populated by rookies and Jamie Elliott. Collingwood will be without Taylor Adams against Fremantle, which is a huge loss, and they may have to consider playing Nathan Kreuger up forward. With the loser of this qualifying final knowing they would have to overcome Sydney at the SCG to make the grand final if they rebounded in the semi-final, this was a year-defining result for the Cats, who did not play how they wanted to under intense Collingwood pressure. – Peter Ryan 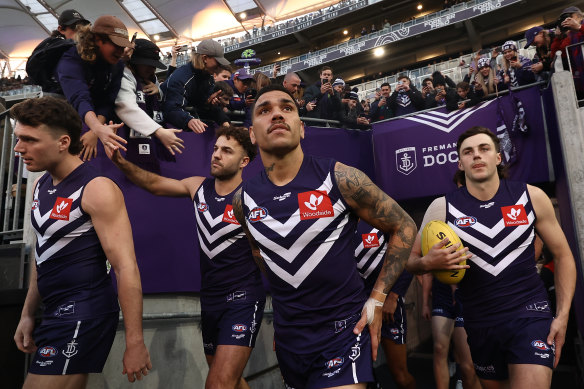 Michael Walters looms as a September X-factor after sparking Fremantle’s miraculous come-from-behind elimination final triumph over the Western Bulldogs. While the Dogs continued to pile on the pain, Walters, at the other end, mirrored the Dockers’ early woes when his first three routine attempts at goal reaped two behinds and an out-on-the-full. He finally got his – and Fremantle’s – first goal after time-on in the second term. From that point, he – and Fremantle – couldn’t be stopped. His breakthrough sparked a four-goal burst before half-time, before he kicked another goal as the Dockers further trimmed the gap in the third term, and again in the fourth as the home side assumed pole position. Walters, one of the few Fremantle players with finals experience entering the clash, has never been held goalless in his 12 finals. And in nine of those he has booted multiple majors. After shaking off the cobwebs, while many of his teammates shrugged off early stage fright, he came to the fore, as he likes to do this time of year. He was aided by the midfield brilliance of Leigh Matthews Trophy winner Andrew Brayshaw and captain-in-waiting Caleb Serong, who both fed off the ruck supremacy of Sean Darcy to prove instrumental and inspirational in the Dockers’ remarkable fightback from 41 points down. Winning a final from that dire position, and doing so in front of a record home crowd, it might have been the club’s grandest performance. Bouncing Collingwood out of contention in front of a vociferous Magpie Army next Saturday at the MCG will require similar guts – but the belief is clearly there now. For the Bulldogs, it was a tough way to end a campaign that promised much but seldom delivered. Twelve months ago they led Melbourne by 19 points in the third quarter of the grand final. This time around they were fortunate to even pinch eighth spot by the slimmest of margins. It will be a summer of soul-searching at Whitten Oval for the Doggies. – Steve Barrett