The AFL is closely monitoring overseas sports that have allowed large crowds on the condition of vaccination or negative COVID-19 tests, as the head of Victoria’s peak business organisation suggested that such measures were the way forward for football and other sporting events to return to full stadiums.

AFL sources said while the the league was focused on getting this season completed amid COVID-19 issues, the league was watching the experiences in places such as the United States and the United Kingdom, where higher jab rates – and mandatory vaccination or COVID-negative test results – has enabled the finals of the delayed Euro 2020 soccer tournament and Wimbledon to be played before capacity crowds. 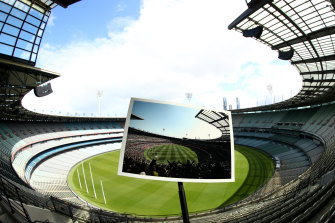 The AFL will be guided by government policy when fans are allowed back in stands.Credit:Getty Images

An AFL spokesman said the league would “continue to review crowd guidelines” that ensured the health and safety of fans, but would not elaborate on a “no jab, no entry” concept that has been flagged by Victorian Premier Daniel Andrews – and the AFL says it will be guided by government policy on crowds.

The recent infection of spectators at AAMI Park at a rugby international and the MCG at the Carlton-Geelong game with the Delta strain has led to the AFL and stadium operators taking a conservative approach to crowds when there are low levels of vaccination.

But the head of the Victorian Chamber of Commerce and Industry, Paul Guerra, said entry subject to vaccination or a negative test – the model seen in the US and UK – was a likely path in Melbourne, once vaccinations were widely available to the public, reaching around 70 per cent, a ratio he hoped was achievable by the Australian Open tennis tournament early next year.

“I think that’s where we’ll probably head,” said Guerra, who still felt it was possible for the MCG to have a capacity crowd at this year’s grand final as well as racing’s spring carnival.

Guerra also suggested that “different arrival times” for fans at venues was a measure that could help the AFL, separate to vaccinations or testing, and he cited the Bruce Springsteen concert, which also required a vaccination to attend.

Like the AFL, Racing Victoria – which had empty stands at last year’s spring carnival – says it will be bound by government policy on crowds. “While this proposal has not been evaluated in any detail, we remain open to exploring any initiative that will assist in the safe return of crowds to Victorian racetracks,” said an RV spokesman.

Formula One Grand Prix officials did not want to speculate on government policy so far out from next season. They are hoping to get Melbourne back on the calendar for what had become its traditional season-opening spot in March 2022.

Prominent epidemiologists such as Deakin University’s Professor Catherine Bennett and the Burnet Institute’s Professor Mike Toole say that vaccination rulings to ease crowds back into sports might be a way forward – but not until the doses of available vaccine give everyone the chance to get the jab, a position shared by VCCI’s Guerra.

”There’s talk around concerts and other things. In some countries [where large crowds have been allowed to various events in recent months, like the Euros] it wasn’t just vaccine passports, you had to have proof that you had an immunological response if you had a prior infection or a negative test,” Bennett said.

“On one hand there is a debate about bringing it forward to people who are vaccinated, but that is problematic because there are people who say ‘I don’t need to get vaccinated because I have already had the infection’.

“You are less likely to have a superspreader event even if you have someone who is vaccinated but has an infection, they are less infectious. It doesn’t prove there will be no virus in that facility but it reduces the spreader events.”

She and Toole say it is too early yet to say how much of an impact large crowds at Wembley for England’s Euro semi-final and final might have had on the increasing infection totals in Britain.