Home » After preparing for the Games in the garage, Tokyo looms for Aussie teen sport climber

Many Melburnians spent the long winter lockdown, figuratively, climbing up the walls at home. Teenager Oceana Mackenzie did so literally.

The sport climber – who at 18 has qualified for the Australian rock climbing team to compete at the delayed Tokyo Olympics in July – had her father build her a wall in their Melbourne garage to practice on during lockdown. 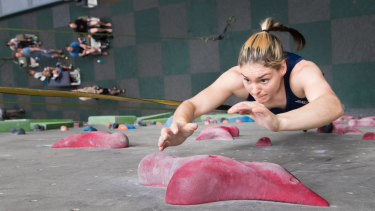 Oceana Mackenzie jumps and grasps for a hold in sport climbing practice for the Tokyo Olympics. Credit:Jason South

Mackenzie took up climbing because her mother and older sisters did it and it’s a choice that’s paid off given her qualification for the sport’s Olympic debut at Tokyo. But keeping her practice up, and thus that dream alive, during the pandemic was a challenge.

How many times did she climb that wall in lockdown, given her regular, much bigger walls at climbing gyms across Melbourne were closed?

“Too many, too many,” she says. “I could do workouts and run but those walls saved me. It was very, very handy having that two-metre wall [by about three metres wide].”

It’s a far cry from the 15-17m high walls she’ll be climbing and jumping around on in Tokyo but in lockdown it had to do.

Mackenzie recalls tagging along to climbing gyms aged eight with her mother and sisters, and then proceeding to climb the walls with no one showing her how it should be done.

“I was too young to climb but because I was so interested in it I would start traversing the wall and the staff members were like, ‘This is not safe, we will put you into a harness and get you on the wall’,” she says.

“I was always pretty serious from age 12, but at my first bouldering world cup [in 2019] I made semi-finals and I realised then I could be pretty good at it.”

In 2016 when the IOC announced climbing would feature at Tokyo, Mackenzie didn’t automatically think she’d be a chance of making it.

“People were like, ‘Oh you know, keep training and see how we go’ so it was always in the back of my mind but wasn’t super serious about it up until maybe 2019,” she says.

At Tokyo there’ll be two gold medals up for grabs (one each for the men and women’s divisions) and the winner will have to be judged the best climber across three disciplines: speed climbing, bouldering and lead climbing.

Mackenzie has put her year 12 studies on hold to focus on the Olympics this year and she spends her time between the gym, climbing indoor walls around Melbourne and getting expert high performance training at the Victorian Institute of Sport.

While the sport is an enormous physical challenge, the mental side of it is not to be underestimated.

Mackenzie says bouldering and lead climbing is like solving a puzzle. The paths laid out on the wall change constantly, with officials moving different combinations of pieces around to keep competitors guessing.

They only get five or six minutes to look at a new path or wall pattern before climbing.

“I am first looking at where we start, because there is a set start position,” Mackenzie says. “The more practice you have the more you can look at the wall and know how the course goes. Sometimes there are climbs when you have no idea how you will do that so it’s jump on and see how I go. Usually you can at least see some sort of path up.

“I love the problem solving. I am a pretty big introvert and competitive so I love the challenge of figuring it out and then doing the climb.

“I quite like dynamic and coordination moves, so jumping around the wall. But I try to be all round. I enjoy working weaknesses too.

“Usually in a competition we have four or five climbs and there’ll be one that’s jumpy, one is more balance and then one or two ones that might be more strength.”