It all began with so much promise for Greater Western Sydney. Barely 13 months ago the club’s leaders were in Melbourne hosting a small group of journalists and commentators at a city hotel and the stated view of one seasoned expert and premiership player was that the Giants were the flag favourites by the length of a straight.

One purpose of the function was to unveil the new captain Stephen Coniglio and it was in that private dining room that Coniglio quietly confirmed that he had refused a proposal to share the captaincy with Phil Davis in 2019 and had accepted the job in 2020 on the basis that he alone would lead the Giants. He also launched, more publicly, a spirited and affectionate defence of his teammate Toby Greene. 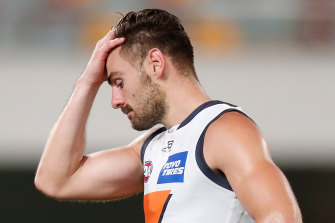 2020 was tough for Stephen Coniglio.Credit:Getty Images

The club’s decision to hand sole leadership to its midfield star – who had spent much of an injury-interrupted 2019 fielding offers from rival clubs before ultimately signing a massive seven-year deal to remain – hurt inaugural skipper Davis who, with Callan Ward’s blessing, had wanted to co-captain with Coniglio the previous season and had not wanted to give up the role in 2020.

Still the Giants launched into the year with a practice-match victory over Richmond and a first-round win against Geelong. There were no early signs that the grand final thrashing had broken their spirit and the club bosses had every reason to believe that their decision to take part in a fly-on-the-wall Amazon documentary would prove a fillip for their fledgling brand in a highly competitive industry.

This is not a criticism of that documentary, the riveting six-part series Making Their Mark, but you could not say the show has enhanced Coniglio’s reputation. He emerges as a footballer searching for form and leadership but unable to find either, compellingly losing his way during the COVID crisis – absent from a training session when others were doing the same and later controversially dropped for a must-win game against Melbourne. At other times he draws our sympathy and was certainly not alone as a GWS senior player unable to cope with or lead his younger teammates through hub life.

Nor has it served to silence the growing chorus of Leon Cameron critics who have not wavered from their belief that the club on his watch has underperformed. It is not simply the seemingly endless barrage of f-words that punctuate Cameron’s conversations – in fairness the other five clubs that were involved played their part there – which see him emerge as an old-fashioned coach with corresponding methods, ill-equipped to make sense of or extinguish the spot fires that ultimately consumed the club in 2020. 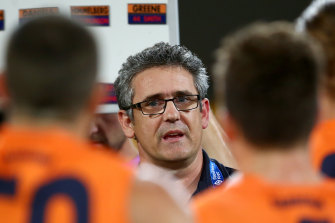 Cameron agreed on 3AW this week that sections of Making Their Mark were uncomfortable for him to watch at times. Interestingly, his chief executive Dave Matthews, who will ultimately decide the coach’s future, chose to watch some of the more confronting parts of the documentary alone with Coniglio, whose leadership he has championed for some years. The public line from all the club’s leaders is that they would go through the exercise again and that had the film been made in 2019 it would have told a different story.

And yet club chairman Tony Shepherd, who says he loathes all reality television, has chosen not to watch the Amazon series. Football director Jimmy Bartel said last week he hadn’t watched it either. Those at the club who were guided through the show’s more difficult moments as the season drew to a close say they were well prepared by the producers at Jam TV for what was to unfold and that for them pain had been dealt with long before the series’ public launch.

But it continues to haunt the Giants and their dismal season start. The epilogue to missing the finals after starting the year as premiership favourite was headlined by Jeremy Cameron’s decision to move to Geelong and abandon trying to win a premiership with GWS. Zac Williams and Aiden Corr from that 2019 grand final side are also gone. Head office, though, refuses to see the window closing for their youngest problem child and while the AFL won’t decide Leon Cameron’s future, his critics at Docklands remain.

For all the great storylines in the Amazon program it is the performances of Cameron and Coniglio that linger as talking points. You might argue that the Giants, as a club still so reliant on the AFL, were disadvantaged because they had no choice but to take part having to push their brand. And yet the Gold Coast were in a similar position and Stuart Dew probably enhanced his reputation.

Richmond endured some horrendous off-field issues – and clearly Damien Hardwick’s family problems were not part of the documentary – and yet Hardwick coached his team to a flag and ultimately emerges as a coach completely in tune with his players when it counts.

Even though some of the 2020 season’s most challenging scenes were left on the cutting-room floor, the decision by the six clubs to let the cameras in was momentous in the context of this game and its four-walls culture. Collingwood embarked on a documentary two years earlier and that film, released in 2019, did not sit well with some club leaders, who saw it as a distraction. Interestingly it went ahead without the initial knowledge of president Eddie McGuire.

Nathan Buckley’s heartfelt and broken speech to his players after the shattering grand final defeat was as poignant as it was compelling and yet other moments, including Adam Treloar’s emotional struggle with sadness, were unpleasantly revisited where Buckley and his off-field lieutenants were concerned when the club last year off-loaded Treloar with such brutality.

Brutal. It’s a word the Giants agree is pretty apt for what went down in 2020 and how it was portrayed on film. For club and coach the road to recovery remains fraught with obstacles.