Home » An insider’s guide to the AFL mid-season draft

Wednesday night’s mid-season rookie draft is an important chance for the bottom 10 clubs to address gaps in their lists, and for players running around in state leagues or the underage NAB League to kick-start their AFL careers. Think Marlion Pickett, who won a premiership four months after Richmond plucked the 27-year-old from South Fremantle in 2019.

To be eligible, clubs must have a list spot available or have moved a player to the inactive list because of retirement or long-term injury.

But this draft is a tough one for recruiters because of COVID-19 restrictions and the fact most Victorians did not play a game last year. This caused the NAB League to become an under-19 competition instead of under-18, allowing players not selected in the 2020 draft to play in the elite underage competition.

This season the NAB League paused for players to return to school or local footy, then restarted for two matches before the draft.

The 19-year-olds who are eligible for this draft are therefore underdone physically, mentally and technically compared with other years. Players in every other state have an advantage because they played through 2020 and started training in November.

Here’s my guide to the top 11 picks, what each club needs and who they have their eyes on.

The youngest list in the league, with one win on the board and a big injury toll, the Roos need basically everything. They have a very good key back in Ben McKay and an ageing one in Robbie Tarrant, so another key back would be great. They have already recruited some tough inside midfielders to complement the very good outside runners, so that isn’t important.

They desperately need two key forwards, having ignored Logan McDonald in last year’s draft to take a mid, so someone who can play forward and also ruck would be the priority. Two players fit the bill: Jacob Edwards and Max Heath. Edwards is 202 centimetres tall, rangy, athletic, bouncy, skinny and competitive. He is very much in the mould of the De Koning brothers from Carlton and Geelong in looks and build but plays more like Luke Jackson from Melbourne. He has had a massive growth spurt and progressed from a key position player to a ruckman. 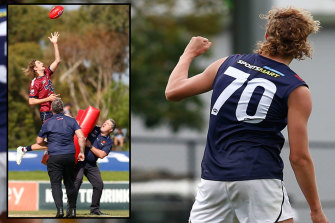 Heath is also 200 centimetres-plus and is much more robust, strong and busy. He can play forward and is physically more ready to go than Edwards. Edwards would be a top-20 player in this year’s draft right now, so North will select him. North are very likely to have two selections and the second one might be robust key forward Jackson Callow, originally from Tasmania, now playing at Norwood in the SANFL.

The Hawks need a midfielder with pace, who can break lines and run straight. They are also desperate for another ruck/forward and there are two they could select here. Ben McEvoy is 31 and back-up Jonathon Ceglar has seen better days. They have a young developing ruck in Ned Reeves, who has just made his debut, and I think they will take another with this pick. Ned Moyle is a 205-centimetre ex-basketballer, who would be selected high in the draft at the end of the year, so why not take him now? Being in a development stage, Hawthorn are likely to have another selection and that could be Jai Newcombe, who has come across from the Gippsland area to play at affiliate Box Hill. He is a tough inside midfielder and the Hawks need plenty of them.

The Pies have young key defenders and running backs but require midfielders and key forwards as well as a small forward. Heath is ideal and the Magpies would seriously be looking at Tyson Stengle. Heath won’t last until their second selection, so they will have to take him here and develop him into a key forward/second ruck role. So I’m suggesting Heath is the ideal choice. They might think with Stengle’s indiscretions over the past two years, he might get through to their second selection. Knowing recruiter Derek Hine, he will have a smokey in mind if they decide to not take Stengle or he is already gone. 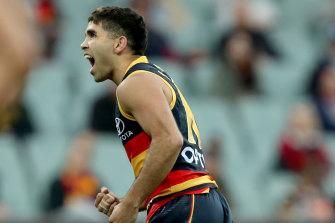 The Crows have started a rebuild, so still need players in most positions. They will just take the next best talent and that might be Ash Johnson from Sturt in the SANFL. He is a talented Indigenous player from Hall’s Creek in WA, who came to Adelaide with Shane McAdam (Crows) and Jy Farrar (Suns). Congratulations to a spotter named Shane Radbone, who brought them to Adelaide and is doing the AFL’s work. Radbone, who has a connection to Hall’s Creek, brings players to Scotch College and Sturt Football Club, and manages them as well. It would be a great story if Johnson were to be selected.

With the loss of Jarrod Witts in the ruck and back-up Sam Day also out for an extended period, the Suns need a ruckman who is ready to play now. Caleb Graham is filling in admirably but they would like him down back. There are many big, tough ruckman around who could fit the bill but the one going well at the moment is Michael Knoll, the ex-Swans rookie-lister. However, concerns over his knee are likely to thwart his bid. With Zac Smith finally playing again, they might consider Moyle, but I think he will be gone.

The Blues are targeting 210-centimetre ruckman Alex Mirkov. They have good coverage on most lines but with Eddie Betts in his last year and Jack Martin more of a midfielder they could use a small forward and if Stengle is still there, they should take him. I’m positive Betts could keep him on the straight and narrow.

With no Dan Hannebery, Jade Gresham, and Zak Jones, the Saints need to look at a midfielder. They need someone who is ready to go, so Riley Knight is a chance. He is a tough in-and-out midfielder, going very well in Adelaide and they could they use some toughness right now.

The Giants would love another key back with Lachie Keeffe doing his ACL and Phil Davis out with a calf, but unless they are hiding one in NSW somewhere, they might pass. Tom Green’s brother Josh is going well as a midfielder but can also play as a third tall back, so might give them some coverage there and it would be great to unite the brothers.

Pick 9: Fremantle (if they open a spot)

There’s not much to do for Fremantle as they have a well-balanced list, although a classy small forward would be handy if there is one in the WAFL worth taking a risk on. They are light on for key backs at the moment, only because of injury, so might look at someone local.

A key back is required here with doubt as cover for Michael Hurley, who hasn’t played this year because of a nasty hip infection. Although Aaron Francis was doing a good job until he got injured, he’s playing on the big forwards when he shouldn’t have to. But I can’t see a key back to select, and Mason Redman and Jayden Laverde have shown they can step into key defensive roles. The Bombers could certainly do with another mid, maybe a defensive one, and Knight might be that player, given he is having a good season in the SANFL after being delisted by the Crows. Callow could come into calculations if available. 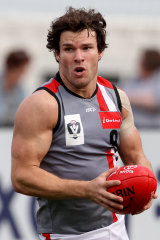 Nathan Freeman has been playing well for Frankston.Credit:Getty Images

Richmond are back in the eight but have a spot available. Ex-Pie Nathan Freeman might be the one. He was pick 10 in 2013, had many soft tissue injuries and sought a trade to St Kilda where he played two games in three years. He has been outstanding for Frankston in the VFL and he is ready to play. There was conjecture about whether he would nominate as he works as a player manager for Paul Connors but he did, which makes me think a club has committed to him. Richmond have a great record with these type of players and will back themselves. They could get a beauty.

Matt Rendell is a former Collingwood and Adelaide recruiter and assistant coach at multiple AFL clubs.