Western Bulldogs cult hero Bailey Smith has returned to the club after a short mental-health break and was in mint condition at training on Wednesday.

Smith had missed the Bulldogs’ opening fortnight of pre-season training but was keen to rejoin the club this week. He took part in main training on Monday, was at the club on Tuesday and completed drills and match practice on Wednesday, ahead of the Bulldogs heading off on their Christmas break. 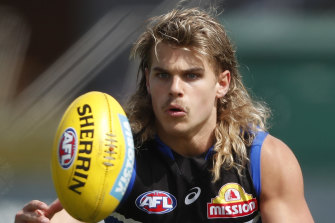 Bailey Smith has returned to the club this week.Credit:AFL Photos

The Bulldogs have not had any issues with Smith’s fitness, for he is a meticulous trainer and was completing individual sessions while away from the club.

Smith, one of the most popular figures in the AFL with more than 340,000 Instagram followers, has been dealing with off-field issues but is now in what sources say is a “pretty good” mental space and had missed training with his teammates.

The clever forward, who enjoyed a stellar finals campaign, has previously spoken about his battles with mental health.

He impressed on the track on Wednesday, coming as teammate Cody Weightman stepped up his return from ankle surgery, which left him in a moon boot for six weeks. He has resumed running and will intensify his training program after Christmas.

It was reported last Friday that Smith had taken time away, but the club was supportive of this.

“We’ll support him throughout, and he’ll return when he is ready. Bailey has maintained an extremely high level of physical conditioning throughout his entire career, and we’re looking forward to reintegrating him into the program at the appropriate time,” Grant said at the time.

Smith found himself at the centre of unwanted attention on a trip after the losing grand final to Melbourne when he was allegedly involved in an incident after midnight outside the Burleigh Pavilion pub on the Gold Coast, leading to a police complaint. No charges were laid. The AFL and Bulldogs took no further action.

Smith has played 67 games for the Bulldogs since making his debut in 2019.

Veteran forward Mitch Wallis said on Wednesday the Bulldogs “had a really good platform” to launch into next year.

“We are going to raise the bar again. Obviously, we fell just a tiny bit short this year but there is renewed vigour and expectation among the group to do the right thing over this Christmas period and come back and look to go one step further in 2022,” Wallis said.

Wallis was overlooked for selection for the grand final but skipper Marcus Bontempelli was delighted his vice-captain remained at the club.

Perth natives Aaron Naughton and Tim English, who have been training with WAFL club South Fremantle, will return to the club after Christmas.

The Bulldogs will resume pre-season training on January 13.