Home » Rugby League » Ben Hunt didn’t want to be in millionaires club, so he’s got sympathy for Luke Brooks

Ben Hunt once wished he wasn’t a member of the NRL’s exclusive millionaires club, so he could dodge the suffocating pressure linked to his salary, as he went in to bat for fellow maligned playmaker Luke Brooks, who he says has his best years ahead of him.

The candid confession from Dragons captain Hunt about the mental toll being a $1 million-a-season earner can have on NRL players is a window into the world awaiting Brooks, whose Tigers pay packet will jump above that mark next year.

Hunt and Brooks have been among the most scrutinised players in the NRL in recent years, the former having been lured to St George Illawarra on a mega-money deal in 2018.

However, the 32-year-old is enjoying arguably the best form of his career – sitting behind only Ryan Papenhuyzen, Mitchell Moses and Isaah Yeo on the Dally M leaderboard going in to round eight – as he prepares to take on a rejuvenated Brooks and his Tigers on Sunday.

And perhaps no rival has enjoyed seeing Brooks flourish in a mid-season move to five-eighth more than Hunt, after the Tigers co-captain kicked a match-winning field goal against the Rabbitohs last weekend.

“I’m definitely happy to see what he’s doing,” Hunt said. “I know it comes with the jersey and the price tag, but you can’t just put the whole thing on his shoulders what happened at the start of the year [when the Tigers lost five straight]. 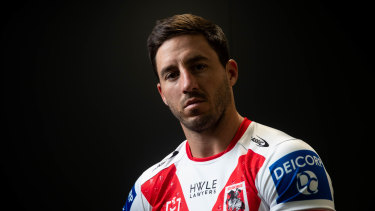 “There’s 17 players in a team and it all just seems to be his fault, which I think is definitely unfair. I think his best footy is still ahead of him now. I think he’s in his perfect position.

“I thought for a long time he would be a perfect six and Jackson Hastings seems to be the right guy to help him out. I’m really happy for him.”

Hunt is in the upper echelon of NRL earners – alongside the likes of Daly Cherry-Evans, Kalyn Ponga, David Fifita, Nathan Cleary, James Tedesco , Jason Taumalolo and Tom Trbojevic – yet there was a time when he wanted to make much less.

However, after starring against the Roosters in an Anzac Day boilover, Hunt said he is finally accepting the scrutiny attached to his pay packet after his high-profile switch to the Red V from the Broncos.

“I’m over it now, but it was pretty frustrating to be honest. You’re only worth what someone is willing to pay you.”

“I’m over it now, but it was pretty frustrating [initially] to be honest,” Hunt said. “You’re only worth what someone is willing to pay you.

“I understand that if you’re getting paid that, everyone is expecting you’ve got to deliver every single week and turn up and play great footy. But when you strip it back, you’re not the only player on the field.

“There’s been periods over the last couple of years where I felt like I didn’t even want to play any more. I thought, ‘I’ve had enough’. You just get over it.

“But it’s always in the back of your mind: ‘I just love footy. I want to play, so why would I stop playing?’ When it gets relentless, and I’m sure it got like that for Brooksy for quite a while, you start second guessing yourself.”

Hunt might be in the twilight of his career, but has no plans to hang up the boots when his Dragons deal concludes at the end of next year.

St George Illawarra have nursed young playmakers Junior Amone and Jayden Sullivan through their system, but Hunt is ready to kick off contract talks for beyond 2023.

“I don’t feel like I want to be finished any time soon,” he said. “I’m always getting asked the old Redcliffe question and I guess it’s understandable. I’m enjoying myself here at the moment and I’ve still got 18 months left, and I’m sure conversations will start in the next couple of months.”

Stream the NRL premiership 2022 live and free on 9Now.