The NSW Blues are set to roll the dice by making a late reshuffle for the opening game of the State of Origin series.

The Herald has been told Blues coach Brad Fittler is expected to switch wingers Josh Addo-Carr and Brian To’o for the game in Townsville despite repeated denials from NSW coaching staff during the week. 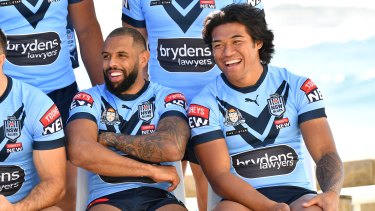 For the second series in a row, Addo-Carr will switch from his preferred left side to play outside of Tom Trbojevic on NSW’s right edge, but the greater focus will be on the 182cm To’o on debut up against 195cm Maroons winger Xavier Coates.

In the lead up to NSW selecting their side for game one, selectors were concerned about the height of To’o against Coates, who is one of the best leapers and tallest wingers in the game.

But Fittler has put aside those concerns and made the call to pin the Panthers metre-eater against Coates, a selection that will shift Addo-Carr away from close friend Latrell Mitchell.

The Blues attempted to play mind games during the week, moving the pair to opposite sides of the field at training before going behind closed doors at the captain’s run in Townsville on Tuesday.

When the Blues allocated roommates at the start of the week, To’o and Trbojevic were paired as the right edge, while Addo-Carr was placed with Mitchell.

“I think I’m on the left with ’Trell [Mitchell] and we’re going to carve up on the left,” Addo-Carr said when asked about the potential switch in the week.

“There’s always that bond we’re going to have. We’re really good mates, brothers to be exact. We’ve been through the highs and lows together and haven’t left each other’s side. We’ve got each other’s back. I can’t wait to play with him again. He’s missed the last two years and it’s good to have his energy again.”

To’o played on the right wing for Penrith last year while Josh Mansour was at the club, but switched to the left this season.