Home » Rugby League » Blues will be better in Perth, but can they match Maroons’ desire?

At 4am, hours after his state’s victory in the first Origin match, Queensland rookie Reuben Cotter was still in his playing gear, with the tape yet to be peeled from his tired joints. The bus transporting the North Queensland members of the Maroons side to Sydney airport was scheduled to leave at 5am, but Cotter sought to soak up every moment of his impressive debut.

Earlier, at half-time in the match, Queensland coach Billy Slater apologised to the young forward for having to play him for the full 80 minutes, owing to injuries.

In Slater’s words, “It was like offering a kid a second ice cream.”

Still, things change quickly during the six weeks of the three-game series. Cotter tore a hamstring in the warm-up before the Cowboys match against Manly, ruling him out of Sunday’s second match in Perth, and Blues coach Frederick Fittler has made mass changes to the Blues.

His new selections should partly address the problems exposed in the first match – vulnerabilities which should have been anticipated. 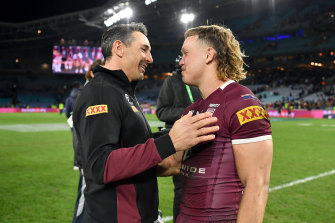 Fittler can only blame himself. NSW have been at the same corner before, knew the number plate of the Maroon truck hurtling towards them, but still couldn’t keep stop from being run over.

The bookies rarely get it wrong, but there was no way Queensland were a dollar underdog in the betting.

Maroons five-eighth Cameron Munster was in better form than any of the Blues; NSW half Nathan Cleary is suspect to intense kick pressure and Queensland had the youth and enthusiasm to win the ruck.

Fittler’s changes mean the Blues’ line speed will be better, especially with Jake Trbojevic taking it forward. But that doesn’t guarantee it will stop Munster. Traditional tactics to tire playmakers, like the Blues running at former Maroons five-eighth Darren Lockyer to force him into repeated tackling, won’t work so well against Munster. His stellar level of fitness since swearing off the syrup even made me consider doing the same, albeit momentarily. 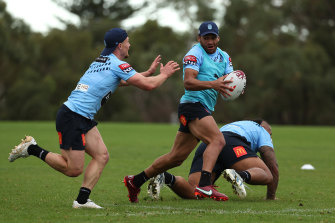 The inclusion of left-side centre Matt Burton gives the Blues an alternative kicker to Cleary. Burton boots the ball so well he could send it down a curved chimney.

The inclusion of Burton’s former Panthers teammate Api Koroisau as a starting dummy-half should mean the ball finds the kickers more efficiently. It was also obvious from the Sydney game that NSW needed to match the Queensland two-hooker game of Ben Hunt and Harry Grant. Furthermore, NSW’s bench hooker, Damien Cook, hasn’t been running as much this season and the Blues need more impact from dummy-half.

But the Blues must do more than shield their weaknesses. Fittler has to anticipate any new Queensland attack. NSW fullback James Tedesco stands up close in the defensive line on the early tackles and is therefore vulnerable to kicks behind him. When the Storm’s Jahrome Hughes kicked early on Friday night and Broncos winger Selwyn Cobbo fumbled and Munster followed through to force the ball and score a try, it might have been a dry run for Munster calling on Maroons half Daly Cherry-Evans to kick early.

Four years ago, when NSW squared the series in Perth, TV vision of both dressing rooms seconds before kick-off showed that the Blues were highly motivated, while the Maroons were distracted. I later asked then Queensland coach, Kevin Walters, why this was. He explained that a ball had wedged in the netting of the AFL-style dressing room and his players were intent on throwing other balls up to dislodge it.

This won’t happen under Slater. The comments from the Blues camp that Queensland assistant coach Cameron Smith is the Maroons’ major weapon via his tips on slowing down the play-the-ball are a distraction. It won’t influence the referee. Furthermore, Slater is in charge. At meetings, Smith speaks; as does Johnathan Thurston, but it’s Billy who wraps it up.

Still, it’s worth remembering that one more play-the-ball in the Sydney game and the score would have been tied. As the Blues look to Perth, perhaps the image of Cotter at 4am is a reminder that at Origin level, in the contest between desire and preparation, desire usually wins.

Watch the State of Origin exclusively live and free on Channel 9 and 9Now.