Campaigners for Collingwood presidential aspirant Jeff Browne have been handed a club membership list of about 12,000 eligible voters, but without email addresses or phone numbers.

A lawyer acting for Browne’s strong backer Francis Galbally says their election campaign on behalf of Browne is disadvantaged by the absence of emails in the club’s membership list, but that they will take no further legal action against Collingwood.

Lawyer James Macdonald of Piper Alderman, who reached a mediation agreement with the club that led to it handing over the list of voting members, said they had received only names and addresses of the nearly 12,000 members who are eligible to vote – and no email addresses or phone contacts, in what he said “was a disadvantage now” to the board challengers, whom his client Galbally is backing. 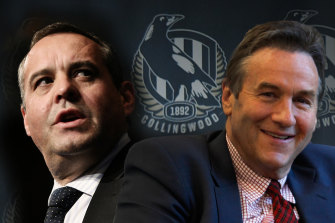 But Macdonald said that the campaign could still contact individual voting members by mail before the annual general meeting of December 12, when Browne, the former Channel Nine boss and AFL lawyer, is prepared to run a ticket to unseat incumbents on Mark Korda’s board, if he cannot reach a deal with the current Collingwood board.

Korda has announced he plans to step down at the end of 2022.

The view of Macdonald is that while they have no email or phone numbers among the 12,000 members list, Galbally and Browne have benefitted from receiving only the details of eligible voters, rather than a full list of Collingwood’s 82,000 members, which would be difficult to sort through to work out who were permitted to vote.

Galbally, who is campaigning for Browne, has pushed for a full spill at the AGM, when four directors – Peter Murphy, Christine Holgate and new and yet to be ratified directors VRC boss Neil Wilson and Dr Bridie O’Donnell – are up for election.

Galbally has highlighted that the membership list his campaign has obtained, on behalf of Browne, found that Wilson and Dr O’Donnell are not on the list of “ordinary members” – those in the higher membership categories that are allowed to vote. That pair would need a waiver at the AGM under the rules if they are elected, to take their voting positions on the board. Wilson is an MCC and Collingwood member, but was not on the list of eligible voting members, according to Macdonald.

In a statement on the membership list issue, Collingwood said:

“Collingwood provided Mr Galbally with the member information he was entitled to and the club was required by law to provide. Collingwood complied fully with the relevant act. Of course, in the interests of the privacy of our members, the club was not going to give out mobile phone numbers and other personal details to a third party.”

Meanwhile, Collingwood have closed down the club’s administrative base after an employee tested positive to COVID-19.

Only a small number of staff have been in the building. They have to isolate and be tested until they receive a negative result. The players in AFL and AFLW and netball have, with few exceptions, not been in the building since their seasons are over.

“A Collingwood employee who has been at the Holden Centre in recent days has returned a positive COVID test result,” the club said in a statement.

“As a precaution, the Holden Centre has been closed and all players and staff who have accessed the complex since last Thursday have been asked to get tested immediately and isolate until receiving a negative result.

“The club is awaiting advice from DHHS as to what, if any, further action may be required.”