Home » Rugby League » Bombers have their sights on Demon Brayshaw, have met with star midfielder

Essendon have met with Melbourne premiership star Angus Brayshaw in a bid to lure the free agent to the Bombers.

Brayshaw, 26, recently met with Bombers coach Ben Rutten and football boss Josh Mahoney, as the free agent considers his options for what will be the biggest contract of his career.

Sources familiar with Brayshaw’s situation and conversations said the Demons had a long-term offer in front of him, and that the 2021 premiers had more confidence in the free agent signing a new deal than in their out-of-contract and in-demand star, ruckman Luke Jackson, who is being courted by Fremantle and West Coast and has told the Demons that he has not yet decided on where he wishes to play beyond 2022. 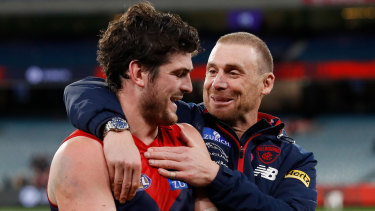 Angus Brayshaw with Melbourne coach Simon Goodwin after their win over the Lions.Credit:AFL Photos

Melbourne’s dealings with Brayshaw have been transparent, with the Demons made aware of Essendon’s interest and also that of Fremantle, where his brother Andrew has become their premier midfielder.

Essendon have been an aggressive suitor of uncontracted players from other clubs lately, having also made a strong play for Gold Coast’s talented small forward Izak Rankine, who has been happy with the Suns, but remains unsigned.

Melbourne sources said that Brayshaw had given no indication he wished to leave the club, but that they did not take his signature for granted until it had been completed. Remuneration is not expected to be a major issue with Brayshaw, who has been paid more than $600,000 in his current contract and will earn more in the next deal; it is more a case of his career path and whether he is satisfied with playing his role at an exceptionally strong team, or if he would like greater responsibilities elsewhere.

Essendon’s pitch to Brayshaw – and indeed that of other clubs – is understood to centre on the fact that he would play as a frontline midfielder, whereas he has spent much of 2021 and 2022 on the wing and at half-back respectively. Brayshaw is seen as a contender for a half-back flank spot in the All-Australian squad this year. Mahoney knows Brayshaw well from their days at Melbourne together – the former having been football operations manager there – and knows of his leadership qualities.

Brayshaw has been consigned to the wing and half-back – and excelled in both roles, underscoring his versatility – because the Demons have superstars Clayton Oliver and Christian Petracca in the centre square and view Jack Viney as a primary midfielder. Brayshaw has been deployed in other positions, despite his midfield capability, in part because he can play those roles more effectively than other midfielders.

But if he went to another club, such as Essendon, he would be in the starting midfield. The Bombers also lack for size and strength in their midfield, compared with the likes of Melbourne, Geelong and Carlton. Their on-ball brigade is headed by smaller playmakers Zach Merrett, Darcy Parish and Dylan Shiel, with Jye Caldwell and others in support.

Jackson has the option of going home to Perth and playing with the Dockers, where he would share ruck duties with Sean Darcy, doing the same with Nic Naitanui at West Coast, or remaining as understudy to champion skipper Max Gawn at Melbourne. The Demons have outlined a ruck succession plan to Jackson in which he would take over as the primary ruckman in the next few years, and are awaiting an answer from him. There appears little likelihood that Melbourne would lose both players.