Collingwood board member Bridie O’Donnell has quit the board just months after her contentious appointment and ahead of the election at the annual general meeting at the end of the year.

Her resignation opens up a fourth board vacancy at the election, potentially making a path to the board easier for challenger Jeff Browne. 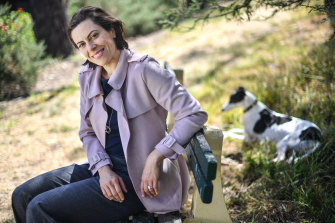 Dr Bridie O’Donnell has resigned from the Collingwood board.Credit:Joe Armao

It also comes after she was criticised by former president Eddie McGuire for posting a captioned photo to her Instagram account urging the Western Bulldogs to beat Port Adelaide last weekend.

McGuire said the photo was ill-advised given the criticism of O’Donnell’s appointment to the board.

O’Donnell’s appointment came with controversy earlier this year, given she had not been a club member for long enough to have voting rights. In addition, a photo emerged at the time of her wearing a Western Bulldogs jumper. She said then the photo was a show of support for friend and then Western Bulldogs board member Susan Alberti.

Collingwood’s board will not seek to replace her with a casual vacancy ahead of the election, which will take place at the annual general meting which has been brought forward to December.

O’Donnell had been appointed as a casual vacancy to replace former board member Alex Waislitz earlier this year and was due to face the members along with three of the six other board members at the AGM.

O’Donnell sent a letter of resignation to the board early on Wednesday evening and that letter was sent to members on Thursday morning, citing a work promotion in handling Victoria’s COVID-19 response for her decision.

While citing personal professional reasons for her resignation, O’Donnell’s departure also seeks to minimise controversy for the current board.

Four of the seven current board members were to face an election at the annual general meeting: Peter Murphy, Christine Holgate, Neil Wilson and O’Donnell.

Three of them had been due to face the election but Wilson, who was appointed to fill the vacancy created by McGuire’s resignation and was not due to be up for election for two years, had chosen to go to the election so that all board members could be elected by the members.

The resignation means that three current board members will go to the election, with a fourth place open to a new board member.

Challenger Browne will stand at the election and is highly likely to secure at least one of those places on the board. He is expected to stand with at least one other person.

Browne has said he wants to join the board and be president. The president of the club is not elected directly by members; board members are voted in and then the president is elected by the board from among their number.

President Mark Korda, who was appointed as a transitional president after McGuire’s resignation, has said he will leave the board at the end of his term at the end of next year.

As reported in The Age on Thursday morning, Korda proposed that Murphy be put forward as president as a peaceful alternative to him or Browne. Murphy rejected that suggestion, saying he was not the right person, was happy to be on the board but will not be president now or in the future.

O’Donnell is a doctor and former international track cyclist who works in public health and was last week appointed to a senior position in the COVID-19 response working with Jeroen Weimar.

“I’ve only been in the job for five days, but it’s clear that it will require 100 per cent of my attention, energy and focus over the next four months as we aim to suppress the community spread of COVID-19 in Victoria,” O’Donnell said.

“When I had the privilege of accepting a position on the board of Collingwood Football Club four months ago, I had no comprehension that I would be taking on a task of this magnitude in September.

“I considered over the last few days that I might request a period of leave from the board, but I’m aware that there are so many important pieces of work underway which require the group’s full commitment.

“Consequently, I will step down from my role as ex officio board director, effective immediately.

“I will continue to remain a fan and member of the club I admire and love, and will, of course, follow the progress of the football and netball teams in the 2022 season and beyond.”