Nathan Buckley is already being pursued by multiple media organisations as a special commentator for the second half of the season, with Channel Seven boss Lewis Martin confirming he will meet with the soon-to-be former Collingwood coach soon.

Free-to-air host television broadcaster Seven and 3AW radio – owned by Nine, which also owns this masthead – confirmed to The Age they will put the question to Buckley’s manager Craig Kelly. 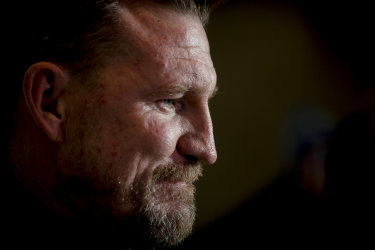 Nathan Buckley will have several offers from media organisations for the second half of the season. Credit:Eddie Jim

Buckley is regarded as one of the best media performers in the AFL, alongside the likes of Geelong counterpart Chris Scott, and his insights would be highly sought after.

“I’ve got enormous respect for him, everyone here does and I’ll catch up with him when he’s ready,” Martin said.

“Look, it’s very early. But I will be catching up with him to have a chat about all things, media or otherwise.”

Buckley has worked at Seven before, after the network beat Channel 10 to his services in 2007 when he finished his playing career.

Buckley has also done several stints on radio, including covering games with 3AW and a weekly segment with SEN’s Gerard Whately.

He will find himself highly sought after in a media sense after Monday’s Queen’s Birthday clash with Melbourne, which Collingwood confirmed would be his last game in charge.

A 3AW executive said on Wednesday they would be “in the mix” to sign him for the second half of the season.

Buckley may also choose to take the rest of the year off and look towards 2022. The club great didn’t rule out a return to coaching when asked during Wednesday’s media conference.

When asked if he could see himself coaching another club, Buckley replied: “I don’t know … I don’t know.

“I am quite content that the decision is the right one, and not just right for the football club but it’s the right one for me in this present moment.

“And I look forward to whatever the rest of my life has to bring … in a professional and a personal sense. And I know that whatever I choose in the future will be with 100 per cent commitment and everything that I’ve got.

“If coaching is on the radar, I still haven’t consolidated that thought now.”

There could be vacancies at other clubs at the end of the season.

Carlton will soon begin an external review of their football department, with pressure mounting on embattled coach David Teague.

The future of Alastair Clarkson, who is contracted with Hawthorn until the end of 2022, has been a talking point all season.