Carlton have sacked coach David Teague after two-and-a-half seasons in the role.

Sources close to the club said Blues players were made aware of the news by Teague on Thursday morning.

Teague, 40, a former Blues best and fairest winner as a player, had rejoined the club as an assistant at the end of 2017, replacing Brendon Bolton as caretaker in the middle of 2019. 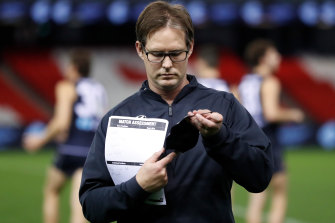 He would ultimately coach the Blues in 50 games, finishing with a 21-29 win-loss record.

Teague had been resigned to his fate in recent weeks, which had been on the cards since Carlton announced a football department review mid-season.

On Wednesday, Alastair Clarkson formally announced he would not be coaching in 2022, having been courted by the Blues.

Former St Kilda and Fremantle coach Ross Lyon will be the early favourite to take over from Teague.

Carlton had committed to informing their members first of any findings of the club’s football department review, but news of Teague’s axing broke before any communication had been issued.

The Age reported on Wednesday night that the Blues board was set for a major refresh with club great Greg Williams set to become football director, replacing Chris Judd, among other changes.