Geelong coach Chris Scott was at a loss to fathom the “silly” fact that Adelaide Oval remains the only major AFL venue where coaches have to wade through fans to get on the ground, after he was allegedly tripped by a crowd member at three-quarter-time on Thursday night.

The crowd incident came after the Cats had to adopt hardline isolation protocols demanded by SA Health to ensure the match against Port Adelaide, which the Cats won by 21 points, went ahead. 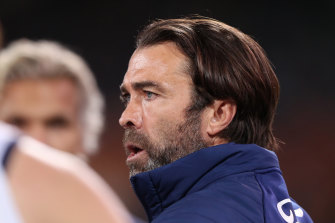 Geelong had an unorthodox preparation, with Scott revealing that he tried to get some daytime sleep under a table at Adelaide Oval while he and players awaited COVID-19 test results.

“We had guys sleeping under table cloths trying to get some darkness, guys spread out … some of the pictures would have been quite comical,” Scott said.

“There were some strange scenes. It was a strange preparation.

“I shouldn’t play it down too much because they were trying circumstances.

“In the fullness of time people might look at Collingwood [beating Adelaide last week] and us coming over here and still winning the game and say it couldn’t have been too bad.

“The restrictions the South Australian government put on us were arduous, there’s no doubt about that.”

The Cats were meant to return to Victoria on a charter flight immediately after the match but had to stay in Adelaide for the night after their flight was cancelled because of fog in Melbourne.

Scott applauded the selfless chemistry that has formed between Jeremy Cameron and Tom Hawkins after the match-winning duo kicked the Cats to the impressive victory over Port Adelaide.

Prized off-season recruit Cameron (five goals) and long-serving spearhead Hawkins (four) were too much for the Power’s defence to handle, whether finishing or creating.

Cameron, a revelation after missing the first five rounds with a hamstring injury, then turned supplier, handing off to fellow gun signing Isaac Smith for his only goal, and spotting up Gary Rohan, who nailed his third, for some icing in the dying moments.

“If you had asked me two-three years ago, I wouldn’t have been able to forecast our key forward at a forward-50 stoppage would hit it to our other key forward who kicks a goal,” Scott said.

“That speaks to the chemistry we’re trying to build. They’re both enthused about the football they can play together.

“We’re fortunate in a way that neither of them have an ego that means they prioritise their own performance over the other.

“I thought Jeremy did some things that very few players in the competition can do. Jeremy is capable of doing some pretty special things.”