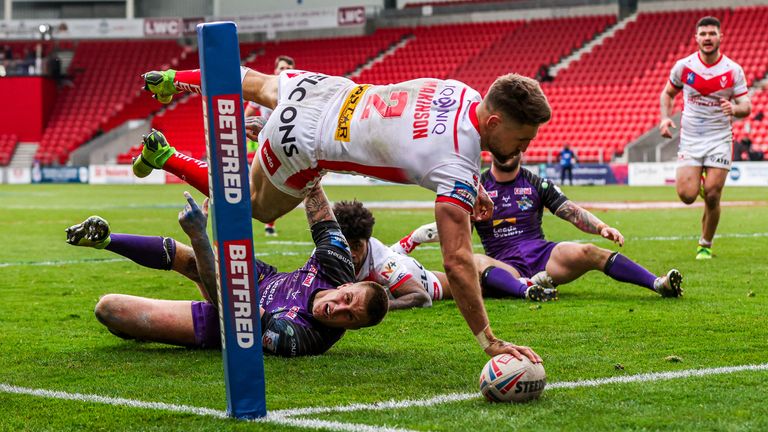 We round-up Saturday’s third-round action in the Challenge Cup, which included St Helens seeing off holders Leeds Rhinos and last year’s runners-up Salford Red Devils going through to the quarter-finals…

Salford became the third team to secure their place in this season’s quarter-finals with a comprehensive 68-4 win over Championship side Widnes at the AJ Bell Stadium.

Two first-half tries from debutant centre Matt Costello and full-back Morgan Escare crossing either side of the break helped the Red Devils on their way, while Krisnan Inu had a fine day with the boot by kicking 10 conversions from 12 attempts.

🎼 I SEE THE SALFORD REDS 𝗔𝗥𝗜𝗦𝗜𝗡𝗚!!!

👏 Salford are through to the @betfred #ChallengeCup Quarter-Final!

Despite being bottom of Super League and without a win to their name this year, Richard Marshall’s men always looked a step ahead of the injury-hit Vikings.

Tui Lolohea also crossed for last year’s runners-up in the first half, with debutant Daniel Hill pulling an unconverted try back for Widnes on the stroke of half time.

It was all Salford in the second half though, with Andy Ackers, Sebastine Ikahihifo, Kallum Watkins, Jack Ormondroyd, Rhys Williams and Chris Atkin all going over along with Escare getting his second.

“It’s important we play ourselves into form because we’ve got some big challenges ahead in the coming weeks,” Red Devils head coach Marshall said. Two tries apiece from Tommy Makinson and Regan Grace helped St Helens book their place in the quarter-finals against a Leeds side who pushed them all the way despite having a man sent off.

The holders were already stricken with injuries which included them being forced to play back rows Rhyse Martin and Cameron Smith in the halves and were dealt another blow when Zane Tetevano was sent off in the second half for a late hit on Theo Fages.

But two converted tries from Brad Dwyer pulled Leeds from being 20-6 down to trailing by just two points with 10 minutes to go before Makinson finished off a superb attack in the 79th minute.

St Helens had gone ahead in the third minute through Makinson, who converted his own try and kicked a penalty to put them 8-6 up at half-time after Mikolaj Oledzki had gone over for a converted score for Leeds.

Into the hat for the quarters! 🎩#COYS pic.twitter.com/CshpwKE3r6

Makinson kicked another penalty following Tetevano’s dismissal and then two tries from Grace looked to have sent Saints through to last eight. However, the Rhinos rallied to set up an enthralling finish only to ultimately fall short.