Cameron Ciraldo is set to make his first big move as Canterbury coach by handing little-known recruit Hayze Perham first crack at the Bulldogs’ No.1 jersey in 2023.

Jake Averillo has widely been tipped as the man to play fullback at the Bulldogs, although Perham has leapfrogged the incumbent and is in line to open the season out the back for Canterbury. 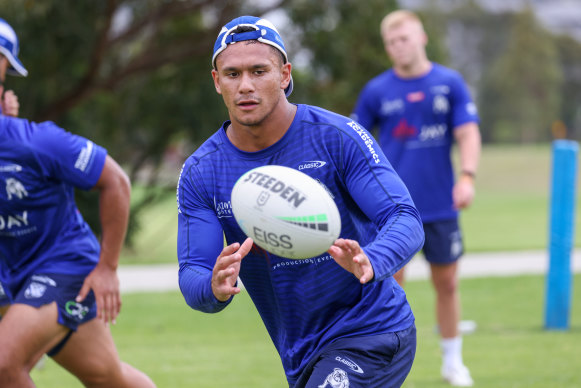 Hayze Perham at training with the Bulldogs.Credit:Bulldogs Media

A Canterbury official confirmed Perham has been training at fullback in preparation to start the season in the role, impressing members of the Bulldogs coaching staff since arriving at Belmore from Parramatta in the off-season.

While the past week has been dominated by reports about Stephen Crichton and who will wear the No.1 at the Bulldogs in 2024, the position for this season has been hotly contested at training.

Ciraldo is renowned for his defensive focus, having helped Penrith to back-to-back premiership wins during his time as assistant coach to Ivan Cleary.

Perham’s communication from the back is one of his strengths. That is deemed pivotal to improving a defensive line that leaked an average of 24 points per game last season. 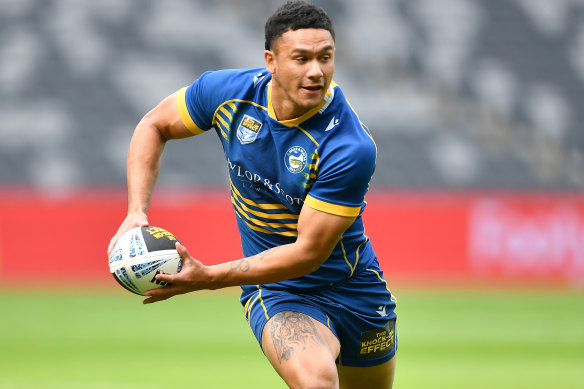 Perham will likely get first shot at fullback at the Bulldogs.

His communication is also matched by his fitness. They are the same two qualities that Penrith fullback Dylan Edwards possesses in bucketloads, making up for what he lacks in natural ability with effort and determination.

Perham joined the club in the pre-season after two years with arch rivals Parramatta. He made his NRL debut for the Warriors in 2019 but has only managed to play 16 first-grade games in an interrupted career.

Part of his appeal is his ability to play multiple positions from the back line to the halves.

Perham has only started one NRL game at fullback. That was in the final round of the 2021 season against Ciraldo’s Panthers – a match in which Eels coach Brad Arthur rested a host of big-name players before the finals series. 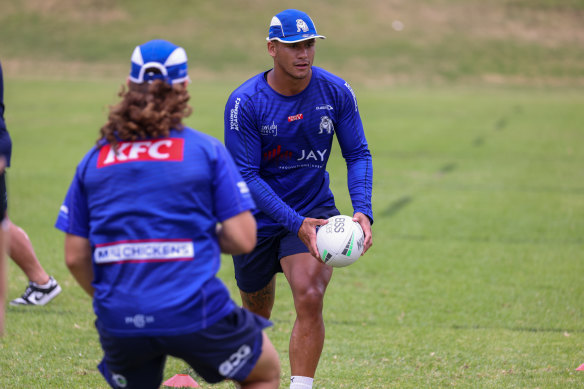 The Parramatta recruit has impressed over the preseason.Credit:Bulldogs Media

Perham used to live with new Wests Tigers back-rower Isaiah Papalii. The Tigers tried to lure Perham to Concord in a move to try to appease his roommate who was having second thoughts about leaving Parramatta.

Perham instead chose to link with the Bulldogs where he has now earned a shot at the No.1 jersey, a position the Tigers have covered with Daine Laurie and Charlie Staines both at the club.

The Tigers, though, have secured the services of former Bulldogs player Brandon Wakeham as a back-up half option.

Perham’s likely selection at No.1 means Averillo is expected to contest for a centre position alongside boom rookie Paul Alamoti, while Jacob Kiraz and Jayden Okunbor will likely battle out for the right to partner Josh Addo-Carr on the wing.

The Bulldogs also have a number of other key decisions to make leading into their first game of the season against Manly at Brookvale Oval on March 4.

Ciraldo is yet to decide on a captain to replace recently retired back-rower Josh Jackson. Addo-Carr is believed to be one of the leading candidates.

The Bulldogs also have decisions to make on their final spots in the top 30 with Josh Reynolds, who is on a train-and-trial contract, pushing for a regular spot in the squad.