Hear the latest theory on the war of words between Ivan Cleary and Wayne Bennett?

Some within the NRL reckon the whole thing has been a Bennett production; a clandestine plot from the master manipulator himself to force Cleary to come out swinging in defence of his son and halfback, Nathan, on the eve of the finals, therefore creating an unwanted distraction for a young Panthers side while also diverting attention away from the pressure Souths were under because of the suspension of fullback Latrell Mitchell.

It sounds too good to be true. Actually, it sounds like a Seinfeld episode. Bennett’s an evil genius — the best rugby league has ever seen — but he’s not that evil.

Ivan Cleary is a good, knowledgeable coach who in the last three seasons has mastered the art of not getting in the way of his ridiculously talented but still young and impressionable team.

Why would he play mind tricks with a Jedi Master like Bennett on the eve of a qualifying final? If the Panthers don’t reach the grand final, it’s on the coach, not his players. 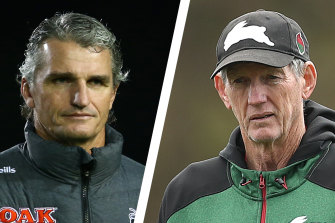 Three weeks ago, after Souths’ 25-12 loss to Penrith in round 24, Bennett called NRL referees boss Jared Maxwell for clarification on a few issues.

Mostly, it was about the “downtown” penalty against forward Mark Nicholls that swung the game in the Panthers’ favour. He also asked about a possible obstruction that led to a Brent Naden try and a crusher penalty against Keaon Koloamatangi that inexplicably resulted in a two-match ban.

Only after all that did he raise the issue of Penrith players illegally blocking Souths defenders trying to get to Nathan before he kicked.

All teams use blockers, including Souths. Like most of the little things in a game of football, the Storm are the best at it.

But Bennett felt the Panthers were dancing a fine line with players illegally moving into the line of rushing defenders. A valid question to raise with the refs boss.

When the conversation made its way into the public domain last week via a story in the Herald, along with Cleary complaining about his son being illegally hit after kicking the ball, Bennett wasn’t angry.

In fact, he was giggling. He couldn’t believe such a juicy morsel had landed in his lap. He gobbled it up like a Grappa entrée.

Bennett is the master of finding the slightest edge, especially in headline matches and especially when his team isn’t expected to win.

He allowed the tension to build and the hate to fester, waiting two days to respond publicly. At his media conference the day before the game, the question eventually came about Cleary’s remarks. 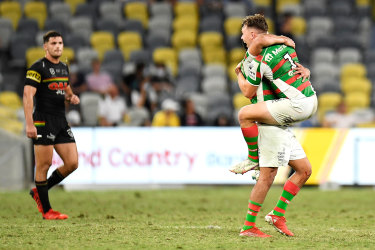 The response was straight out of the Bennett playbook: he came out swinging for his players, yet further evidence that the coach was in their corner.

On Saturday night, his players exploded out of the blocks and then defended the last 20 minutes like their lives depended on it. More importantly, they didn’t want to let down their coach.

After the game, Cleary was snappy with reporters, but he should be snappy with himself. His team looked frustrated and his son overplayed his hand as the minutes ticked away.

Does highlighting a particular trend or illegal tactic in the media really work?

For decades, coaches and officials have leaked footage, stills, stats, win-loss records and penalty counts under certain referees for certain teams to the press.

It usually happens just before finals matches and judiciary hearings. I mean, is it really a State of Origin if there isn’t one story from the respective state’s tabloid newspaper about some illegal tactics?

Coaches often tie themselves in knots searching for an advantage, no matter how small.

Many years ago, a fired-up coach phoned me right on deadline the night before an important match.

“I’ve got a really good story for you,” the coach said. “We’ve never won a match under this referee at this ground.”

“That’s great,” I said. “But you said the same thing in a press conference earlier today to about 30 reporters.”

“Good point. See you at the game.”

Then he hung up.

NRL head of football Graham Annesley refereed in the era of Bob Fulton and Phil Gould, two of the most manipulative coaches of the modern era alongside Bennett.

While coaching Manly, Fulton was known for sending out messages to his captain to have a crack at the referee during matches about penalty counts. Gould once threatened to pull his Roosters team from the field during a match against Fulton’s side at Brookvale Oval.

The Roosters won and chairman Nick Politis came bounding into the dressing-room afterwards.

“Say whatever you want about the refs, baby!” he said. “I’ll pay all the fines!”

Earlier this year, Annesley blasted coaches for blaming match officials to take the heat off their side’s diabolical performances — the oldest tactic in the book — but he doesn’t believe referees are influenced by what’s planted in the press.

“They see an incident, and they instinctively react,” he said. “They don’t think, ‘Geez, they spoke about this in the media, I better act differently’. That’s just not realistic. When you see something, you just respond. You don’t have time to process other matters.”

Whether it was by design or not, Robinson’s comments drew attention away from the fact his side had lost 54-12. Bennett would’ve done the same thing.

Cleary, however, should leave the role of part-time spin doctor to the pros because he’s left his side with the toughest of tasks to win the premiership.

Only a handful of teams in the NRL era have won the grand final after losing finals matches: the Storm in 1999, the Bulldogs in 2004 and the Cowboys in 2015.