Penrith coach Ivan Cleary has declared his club is “vigorously defending” the sanction handed down to the Panthers following a controversial stoppage in play during the semi-final after trainer Pete Green’s immediate suspension by the NRL.

In a move which puzzled the club, Green was barred by the NRL from the Panther’s preliminary final against the Storm over the alleged breach of rules despite the club having five days to respond to the proposed penalty.

The club will now move to fight Green’s suspension as well as the fine over the coming days.

Cleary said he felt both Green, the club’s orange-shirt head trainer and senior physiotherapist, and blue-shirt assistant trainer Hayden Knowles, who was issued with a warning, had been “named and shamed” by the NRL.

“I think that’s completely unfair,” he said. “Certainly in the background were are vigorously defending it. We understand that the NRL was probably put under a lot of pressure with so much publicity and whatnot. But our boys were just doing their job and taking care of our players.

“We care about our people here and feel that was a bit disappointing.” 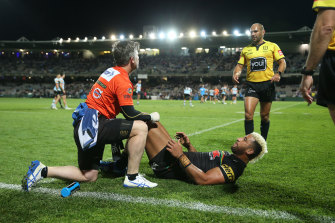 Penrith trainer Pete Green has been banned for the rest of the NRL season.Credit:NRL Photos

Green stopped play to assist hooker Mitch Kenny in the 76th minute of Saturday’s game in Mackay when the Eels were in attack 10 metres out from the Panthers line.

The NRL rules state a head trainer can only stop play after making an initial assessment that a doctor needs to enter the field of play.

The penalty for Green was heavier given he had been issued a show-cause notice for a similar incident earlier in the year.

“We love Pete. He’s a legend. We’re talking about a guy who is extremely popular, outstanding at his job. The utmost integrity,” he said. “So we’re certainly all behind him.” 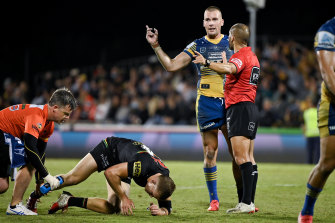 While Kenny has likely finished his season with last week’s injury, Cleary confirmed on Friday both Viliame Kikau and Brain To’o, who were under injury clouds, will be right to go for Saturday afternoon’s game.

Cleary said the week off for To’o has done wonders for the star winger both mentally and physically.

“He looks completely different this week,” he said. “He is a big part of our team not just the way he plays but the way he connects with people around him and the energy he brings.”

Despite two tough finals games against the Rabbitohs and the Eels, Cleary said fatigue was the least of his worries going into this week’s game given the youth of his squad.

“I’m not worried about being tired at all. There have been absolutely no signs of that in this team, probably for the last two years,” he said. “Yes, we’ve gone through a couple of tough encounters for sure. Yes we’ve had a few injuries as well. But there’s no signs of tiredness.”