Home » Rugby League » Crows-Pies game to go ahead but fans told: ‘duck and just do not touch that ball’

The AFL has confirmed Saturday’s Adelaide-Collingwood match will go ahead as scheduled but South Australians have been warned to “duck and just do not touch that ball” if it heads into the stands.

The AFL finalised the round 12 fixture on Wednesday afternoon, confirming that Adelaide’s match against Collingwood will go ahead as fixtured at Adelaide Oval in the twilight slot, with the Pies to fly in and fly out on match day. 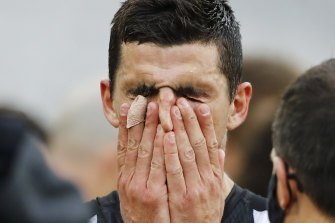 Collingwood skipper Scott Pendlebury. The Pies were in a holding pattern regarding this weekend’s AFL fixture until the AFL confirmed their game would go ahead as planned.Credit:Getty Images

In a press conference on Wednesday afternoon, South Australia’s chief public health officer Professor Nicola Spurrier said the COVID-19 risk was negligible as the Magpies were already in quarantine at home in Melbourne along with their families or housemates.

The Magpies will also fly into the state on game day, travel to the stadium on an SA Health controlled bus and fly out after the game.

But she encouraged supporters at the game to avoid touching the ball or the players.

“We are working through the details of what that will mean.

“If you are at Adelaide Oval and the ball comes towards you. My advice to you is to duck and just do not touch that ball.”

SA Health is talking to Adelaide Oval staff about reducing contact opportunities between fans and players and the ball.

Only essential staff and players have been allowed to enter South Australia and they will need to be tested and sign documents to say they haven’t been at exposure sites in Victoria.

Spurrier said future games would need to be considered on their own merits including next round’s scheduled clash between Port Adelaide and Geelong.

“Now this in this instance, these people are playing, it’s part of their work,” she said.

“My job is actually to keep this and make this as safe as possible.”

South Australia has closed its border with Victoria following Melbourne’s latest COVID-19 outbreak, but the AFL sought special dispensation for the game to go ahead.