The Roos activated their sub in the first quarter when Luke McDonald injured a pectoral muscle and minutes later Cameron Zurhaar was also out of the game with concussion, leaving the home side with three on the bench for the remainder of the match. 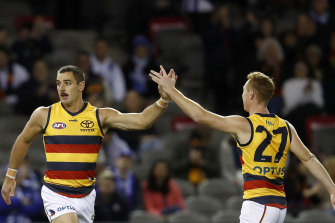 A fast start from the Crows produced a two-goal advantage within two minutes – both off the boot of former captain Tex Walker – but the Roos responded from 15 points down at half-time to claim the lead for the first time late in the third quarter when Tarryn Thomas drilled a 50-metre set shot to put his side four points ahead.

Thomas, who had just three touches to the half, kicked two goals and had eight touches in a clinical third term, only surpassed by former Magpie Jaidyn Stephenson.

The speedy forward worked hard into defence from the half-forward flank and broke the game open a number of times, bursting through the corridor with ball in hand. He had 10 disposals in the third quarter and kicked his second goal, helping the Roos take a narrow lead into the final break.

But the Roos ran out of legs late as the visitors piled on eight of the last nine goals to claim a 41-point win.

A crucial centre-bounce free kick against North Melbourne for failing to set up the traditional 6-6-6 playing positions early in the last term saw the Crows go forward to score their third unanswered goal of the final quarter and open up a 17-point lead.

And when Darcy Fogarty kicked his third goal from just his fourth kick of the game, the Crows had opened up an unassailable buffer. Nick Larkey kicked his side’s only goal of the final quarter but it was to little avail. 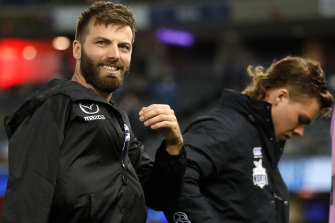 Luke McDonald (left) and Cameron Zurhaar of the Kangaroos look on after exiting the match against the Crows injured.Credit:Getty Images

North Melbourne’s injury list continues to grow, with McDonald expected to spend another stint on the sidelines with a pectoral tear.

McDonald only just returned to the team on Sunday after missing the first three rounds with a quad strain.

The Roos also lost Zurhaar to a concussion in the first term of Sunday’s game against the Crows, which will see him ruled out of next Sunday’s match against Geelong under the AFL’s 12-day enforced break policy.

Robbie Tarrant (kidney) and Jared Polec (hamstring) remain on the long-term injury list at Arden Street, however Trent Dumont (calf) and Curtis Taylor (concussion) are close to returning from injury.

Walk in the park

Tex Walker’s currency continues to grow after the veteran forward added to his 17-goal tally from the opening three rounds. 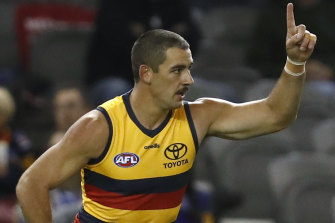 Walker, the Crows’ all-time leading goal kicker, booted three on Sunday including two in the opening two minutes of the game to take his record to 20 goals from four matches.

A month into the season, bookmakers have established Walker as their Coleman Medal favourite.

Walker has never won the league goal-kicking award; his best season came in 2012 when he kicked 63 goals across 16 regular season games and three finals.

North Melbourne captian Jack Ziebell, 30, has also continued his rejuvenation, recording a fourth-consecutive 20-plus disposal game across the backline.

It’s Ziebell’s highest disposal start to a season across a 13-year career.

Aaron Hall was the most prolific player on the ground, amassing 33 disposals including five inside-50s and seven rebound-50s, while Jy Simpkin (29 touches) and Ziebell (25) were also busy.

But the Crows’ fleet-footed brigade did the most damage. Lachie Sholl and Rory Laird had 31 touches each, complemented by Paul Seedsman (25).

Laird was arguably best on ground in his side’s win, racking up 11 clearances and 18 contested possessions, while ruckman Riley O’Brien had 32 hit-outs and six clearances against Todd Goldstein and Tom Campbell.