Collingwood midfielder Jordan De Goey will be back in the New York Criminal Court on January 4 with a decision to be made on January 18 after he appeared via video link on Thursday morning AEDT to face assault charges from a night out in New York in late October.

The 25-year-old was dressed in a white shirt and dark suit coat in Melbourne and was represented by his New York lawyer Jacob Kaplan in the hearing presided over by judge John Zhuo Wang. 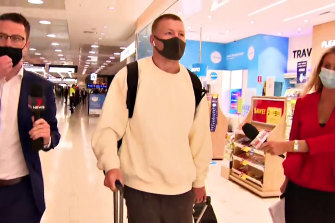 It took less than 10 minutes for the judge to determine De Goey, who faces four charges, would be back in court for a motion schedule, which he can attend remotely before a final decision is made in mid-January. His companion at the PHD rooftop bar in New York when they were arrested, Luke Dyson, was given the same decision.

De Goey, who is set to remain stood down from the Magpies, spent Wednesday evening training on the Bellarine Peninsula with Leopold, coached by former Collingwood assistant Garry Hocking.

The club will have a new board after December 16 with likely president Jeff Browne telling 3AW Radio on Wednesday night he needed to know the facts before making any comment if he was elected to the board and became president.

“[It would] be foolish and improper for me to express any view about that until I know all the facts,” Browne said. “Everybody should be listened to, all of the facts turned over and a sensible decision made in the best interests of the football club.”

“I won’t pre-judge him or the situation.”