Trailblazer Debbie Lee has been unveiled as the first woman inducted into the Australian Football Hall Of Fame.

With the 2021 inductees revealed in a broadcast-only event on Tuesday night due to COVID-19 restrictions, Lee joins St Kilda champion Nathan Burke as the newest members of the Hall Of Fame.

When primary schooler Debbie Lee played footy alone in a Pascoe Vale backstreet, she would hide if a car came. “To say you were a footballer was to invite judgment,” Lee told Martin Flanagan six years ago. 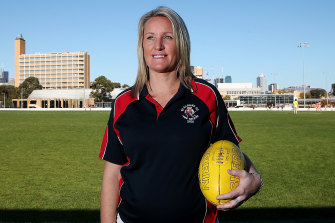 In the 40-odd intervening years, Lee played 302 senior games, most of them for VU Western Spurs – a club she started herself and captained for 14 years – and won seven club best and fairest, five comp B-and-Fs and three flags.

She has had two awards named in her honour, been president of the Victorian Women’s Football League and contributes to the game still as Western Bulldogs women’s footy manager. Oh, and she’s done her knee twice.

Lee was and again is a pioneer.

St Kilda champion Burke played more than 300 matches for the Saints and is a member of the club’s Team Of The Century.

Through his 17 years and then record 323 games, St Kilda had its many and characteristic ups and downs, but he was as constant as a calendar. Daughter Alice carries the family torch at the Saints.

This year two men declined the honour of Hall Of Fame inclusion. Adam Goodes’s refusal because of the game’s paucity of support for him in his final couple of years had been well flagged and was acknowledged by AFL chairman Richard Goyder on Tuesday night. 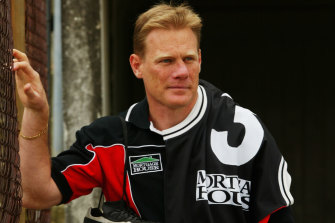 In a way, this also was flagged. “He is not driven by the prospect of fame and fortune, but by a deep and abiding love for his club,” Mike Coward wrote in his Men of Norwood in 1993. “He is a loyalist who will not be compromised and cannot be bought.” McIntosh resisted all overtures from AFL clubs.