Melbourne key defender Steven May has recovered from surgery to repair his damaged eye socket and, assuming he gets through the main training session on Wednesday, should be cleared by doctors to return for this week’s blockbuster Anzac Day eve clash with Richmond.

May suffered eye socket damage and a concussion in a clash in round four and missed last week’s win over Hawthorn, but could be able to return as soon as this week. 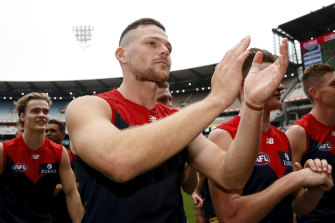 Steven May could be set for a return to the Melbourne lineup in time for the clash with Richmond. Credit:Getty Images

May will have served the 12 day lay-off required under the concussion protocol but will need to be re-tested for concussion and cleared by doctors before being free to play.

“(He) is a possibility this week. He had his surgery and he’s got a pretty solid week to work through from a physical perspective, but if he’s not right we won’t take a risk with him either,” Melbourne coach Simon Goodwin said.

The availability of forward Bayley Fritsch remains uncertain as he recovers from a broken hand.

He is a 50-50 proposition and, if he does play, would be expected to wear a glove to protect the hand.

If Fritsch does not come up then the Demons would still be expected to make one change with highly-rated forwards Sam Weideman and Ben Brown both playing well in the VFL.

Forward Mitch Brown, who played well in his role for the Demons last week, had more impact late in the game. He would be unlucky to miss, but he was retained as a back-up forward to both Weideman and Brown whom the club will be eager to work into the side. He shapes as the most likely candidate to make way for Fritsch or, failing that, either of Weideman or his namesake recruit Brown.

While Luke Jackson has not hit the scoreboard heavily yet, he is developing good chemistry with Max Gawn in rotating time in the ruck and forward and the pair are becoming a difficult combination. 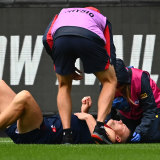 Steven May is attended to by trainers during Melbourne’s round four clash with Geelong at the MCG.Credit:Getty Images

Young forward Weideman would be likely to have his nose slightly in front of Ben Brown given he booted seven goals last week in the VFL and the former North Melbourne forward is still working his way back from having missed a big chunk of football last year due to a knee injury.

It’s an embarrassment of riches for the Demons after entering the year with uncertainty surrounding the key forward roles due to injuries to Weideman and Brown, but Tom McDonald has been their surprising reinforcement, rediscovering his best form at the right time after battles with form last year saw him squeezed out of the side.

His mobility this year as he looks leaner and fitter might enable him to play higher up the field if a Weideman came in and played closer to goal.

The Anzac Day eve game will almost overshadow the traditional Collingwood versus Essendon Anzac Day clash as undefeated Melbourne take on the reigning premiers for their sternest test yet of this new season.