Melbourne have the talent to be special but their 22-point win over Fremantle on Saturday showed they have yet to develop a ruthless streak.

With Steven May and Jake Lever thriving in defence and the likes of Clayton Oliver and Christian Petracca to lead their midfield, the Demons had a bumper win in their sights at half-time. 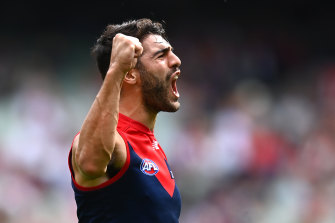 But they struggled to put away a Dockers side which played with grit but didn’t have anywhere near the same level of talent, bar for the stellar play of Andrew Brayshaw, Nat Fyfe and Caleb Serong.

Granted it’s round one and players are still to build match-fitness and re-adjust to fully timed games but one could still picture a Richmond or even a Western Bulldogs side putting a much bigger score on the board in the same circumstances.

The combination of groans and cheers from the 21,365 fans, mostly Demons followers, suggested they may feel the same way.

The Demons had the game at their mercy in the first half as the Dockers continued to cough up turnovers.

May was having a field day in defence, winning the ball at half-back and also pushing forward, coming up with four rebound-50s and three inside-50s for the quarter, while Kysaiah Pickett and Ed Langdon looked dangerous up forward for the Demons, who led 28-4 at quarter-time.

Fremantle’s first goal didn’t come until eight minutes into the second term when Melbourne-raised forward Sam Switkowski snapped a goal which the skilful Liam Henry followed with a tidy kick from the boundary soon after.

Tom McDonald came into the game with some marks as a key forward as the Demons held a 22-point lead at half-time.

The Dockers took their time coming back onto the ground for the second half but they were much more effective defensively, forcing the Demons into places they didn’t want to be and stopping the flow of quick ball to their forwards.

That hard work paid off in attack as Matt Tavernor kicked his first goal and Connor Blakely followed with another to cut the lead to 11 points.

The Demons did get their own back with Bailey Fritsch and creative forward Charlie Spargo kicking goals to extend the lead although a running goal to Andrew Brayshaw cut it to 62-45 going into the last term.

The Demons controlled play in the last but couldn’t break away, although ruckman Luke Jackson’s high marking was a reminder there is plenty still to come from Melbourne.

Demons first-gamer James Jordon, wearing number 23, made a good fist of his arrival in the big league with 15 touches and a goal in the second term. The 20-year-old drifted forward with the Demons and jumped up with a contested ball before landing, swivelling and snapping truly for his major. He was set upon by his teammates, who clearly wanted to celebrate the milestone.

Fremantle’s Alex Pearce made his long-awaited return to the Dockers after 659 days out due to ankle surgeries in 2019 and 2020. But the 53-game defender didn’t last long before he had to hobble off the ground with a knee injury and was replaced by medical sub Stefan Giro. It was horrible luck for the popular figure who was named best clubman at the Dockers for his work behind the scenes while rehabilitating.